Progressive Democracy Works for the 1% 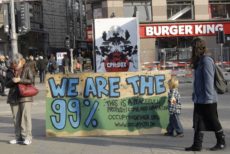 The Occupy Wall Street movement that began in 2011 protested government policies that favored the 1%, the elite, over the 99%, the masses. Their protests were justified. The Wall Street fat cats who owned mortgage-backed securities were bailed out, but homeowners who had lost their jobs and couldn’t pay their mortgages were foreclosed. But that’s the way Progressive Democracy works.

We can look at those two ideas of Progressivism and Democracy to see why.

Democracy can be thought of in several ways. One is that it is a method of peacefully choosing and replacing those who hold government power. But that view of democracy has been replaced by a broader one. People view democracy as a type of government that carries out the will of the people, as determined by the outcomes of democratic elections.

This view of democracy, widely accepted today, legitimizes anything the government does, because a democratic government is just implementing the policies chosen by the voters.

Progressivism is an ideology that views the role of government as not only protecting individual rights but also looking out for people’s economic well-being. Often, this means imposing costs on some for the benefit of others.

In the twenty-first century, Progressivism is even more explicitly redistributional. Welfare payments, Medicaid, food stamps, and other Progressive transfer programs explicitly take from some for the benefit of others.

Now, look at the combined ideologies of Progressivism and Democracy.

Progressivism says one role of government is to take from some for the economic benefit of others, and Democracy says that when government does this, it is carrying out the will of the people.

Because Progressivism is deliberately redistributional, under the idea that Progressive governments look out for the economic well-being of their citizens, the ideology of Democracy, which says democratic governments carry out the will of the people, legitimizes everything Progressive Democracies do.

After the bursting of the housing bubble which led to the Great Recession, the Wall Street fat cats were bailed out to prevent a financial meltdown that would have been bad for everyone, or so we were told. The 99% paid the cost to bail out the 1%.

Who makes public policy? It is the elite, the 1%. The ideology of Progressive Democracy gives the 1% license to benefit whomever they see fit, based on the idea that whatever they do, they are carrying out the will of the people.

If the 1% has the ability to decide who benefits from public policy, we should not be surprised to see that the benefits of public policy go to the 1%.

The idea that the 1%, the elite, benefit at the expense of the 99%, the masses, is well-recognized, and the twenty-first century has seen substantial criticism of cronyism, corporatism, and government favoritism by various other names (including corruption).

This has happened because citizens accept the ideology of Progressive Democracy. They accept the idea that it is legitimate for government to benefit some at the expense of others, and that when democratic governments do this, they are carrying out the will of the people.

Not surprisingly, when the 1% can, with the appearance of legitimacy, decide who should benefit from public policy, public policy favors the 1%. The surprising thing is that when the masses see that the elite are designing public policy to favor themselves, their recommendation is to give the elite even more power.