The Double Tax on Saving 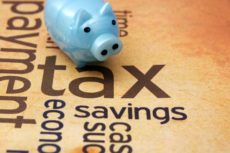 In an earlier post I argued for expanding tax-deferred retirement accounts because they eliminate the double tax on saving that exists under the current tax system. Here is the basic idea. People earn income and pay income tax on that income. If they save it and then earn interest (or dividends, or capital gains, etc.), they will be charged income tax on income that has already been taxed, amounting to a double tax.

To see that this is the case, consider this simple example (numbers chosen to make the example easy to follow).

Assume that with no income taxes, you decide to buy a new computer which costs $1000. Further assume the interest rate is 5%. Instead of buying the computer, you could put the money in the bank and earn 5% interest, or $50 a year. With no taxes, it costs the same amount to buy a $1000 computer as to receive $50 a year in interest.

Now, assume that there is a 50% income tax. (California’s highest income tax bracket is 13.3%, so combined with the highest federal rate of 39.6%, a high-income Californian could be paying a 52.9% rate.)

This example shows why when income is earned as a return on after-tax income, taxing the earnings amounts to a double tax on saving.