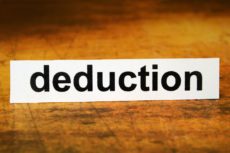 As Congress considers tax reform, the focus on the personal income tax should be to lower rates and eliminate all deductions except for a standard deduction that applies to everyone. Lower rates enough to offset the increased revenue from eliminating deductions, and set the standard deduction at a level that raises the same amount of revenue as the pre-reform tax system. Personal income tax reform should be revenue-neutral. That avoids debates on whether taxes should be raised or lowered and focuses on making the tax system fairer and more efficient.

The deduction for charitable contributions seems, well, charitable, until you look at what constitutes charity. Symphonies and operas, public policy organizations, and educational institutions are often causes that may be worthwhile, but disproportionately benefit the rich. Not all charitable organizations are that way, of course, but how do we draw the line? Rather than trying, why not eliminate the deduction, which then would allow lower tax rates for everyone?

We could make a similar argument for all deductions. Just eliminate them all. One that I might consider a special case under certain circumstances is health insurance, which I will discuss in a later blog post.