American Health Insurance Is Upside Down 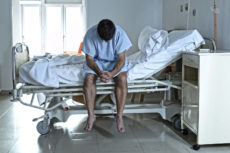 Writing in The Week, Ryan Cooper shares a chilling story about an Obamacare Gold-level health insurance policy that let its beneficiary down when he needed it most:

Stewart is 29 years old, and was pursuing his Ph.D in American history at Texas Christian University until ill health forced him to withdraw. He lives in Ft. Worth, Texas, with his wife of six years, who is a junior high school teacher in a low-income district. They own their home. Before he came down with complications from cirrhosis caused by autoimmune hepatitis, he says he led a scrupulously healthy lifestyle—he does not drink or do any other non-medical drugs, he says, and was a devoted hiker before disaster struck. And he was insured—indeed, he had a gold plan from the ObamaCare exchanges, the second-best level of plan that you can get.

But now he faces imminent bankruptcy and possibly death.

This is exactly the type of catastrophic illness for which insurance should pay. Why does it not? Liver failure is not usually associated with people who live healthy lifestyles – quite the opposite. However, other than a small variation in premium for tobacco use, insurers are forbidden from “discriminating” against those who abuse drugs or alcohol in favor of those who are struck with liver disease for other reasons. (Although not described in the article, this may be a genetic predisposition.)

So, insurers do the best they can to limit benefits for liver disease, despite legal and regulatory attempts to prevent them from doing so. Why are laws and regulations not very effective at addressing this perverse outcome?

The proportion of people in circumstances like Stewart’s is very small, not really a powerful political constituency. Instead of allowing a market for health insurance that indemnifies beneficiaries from financially catastrophic costs, politicians prefer to promise citizens “free” benefits which most citizens expect to use relatively constantly. Instead of hard data on health outcomes for expensive and deadly diseases, research produced in support of the health benefits of Medicaid tends to report increased access to dentists and vaccinations, which is self-reported by dependents in telephone surveys.

As long as we allow politicians to design health insurance, the sickest patients will suffer most.