My Vagina Doesn’t Care for Your Identity Politics 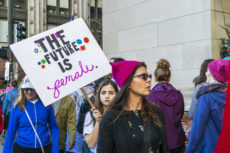 A couple years ago I arrived in New Orleans for a small conference. Prior to the opening dinner and reception, I went to the hotel gym to exercise. There was a man on one of the other cardio machines, and a national news network was on the TV. I got on the treadmill and start running.

On the screen appeared Hillary Clinton, then seeking the Democratic nomination for president. The story centered on Clinton’s historic run. In particular, the reporters were asking women what they thought of Hillary Clinton and the idea of voting for a woman. The respondents stated that voting for a woman would be an amazing experience. They mentioned nothing of her politics, only her gender.

At this point, the man on the other machine said,

Excuse me. Can I ask you a question?

Would you ever vote for someone because of their gender?

My response was quick.

I’d much prefer to know what’s going on between someone’s ears than their legs.

He seemed pleased with this answer. We chatted a bit more and uncovered we were both attending the same conference. We’d talk more that weekend about Clinton’s run, politics, and economics.

That quick conversation in the gym stuck with me. First of all, it’s a pretty bold way to start a discussion. But more importantly, I suppose it was the first time I’d really thought about the idea of voting for someone based on a particular characteristic or basing my decisions off of my gender. Such an idea seemed downright nuts.

This past election has centered around identity politics—the notion that one’s political positions are based on the groups with which they identify (e.g. female, black, gay, disabled, white, male, etc.). On social media, it wasn’t uncommon to have articles, posts, and comments qualified with things like, “as a cis-gendered white male,” or “as a woman of color,” or “as a genderqueer Hispanic.”

When offering one’s opinion about a particular topic, sometimes it’s helpful to articulate a part of one’s identity. It’s a way of letting people know how our backgrounds relate to our opinions. For instance, when discussing trends in education, I will often say, “as a college professor,” as a way of telling people that what I’m about to say is based on my experiences in higher education. But the current culture of identity politics seems to have little to do with helping one another understand different perspectives. Instead, it serves to divide and dismiss other people—particularly those who don’t toe the party line of the progressive left. If you disagree, it’s because you’re [fill in the blank] and should probably “check your privilege.”

Nowhere is this more apparent than with “women issues.” Are you a man with an opinion about abortion, Planned Parenthood, traditional gender roles, etc.? In the era of identity politics, your penis apparently invalidates your opinion.

But don’t feel too bad. I have written against things like mandated paid maternity leave and doubted the veracity of the supposed “gender wage gap.” While you’d think my two X chromosomes would allow me to talk about these issues in the realm of identity politics, you’d be wrong. Since I don’t have children yet, I’m apparently unqualified in some circles to talk about maternity leave. Since I deny a meaningful gender wage gap, I’m either “privileged” and totally out of touch or I’ve fallen victim to the narrative put forward by, you guessed it, men. Forget the PhD in economics, the fact I work in a male-dominated field, or that I grew up in a middle class family. Such information is apparently unimportant.

I’m certainly not the one who has experienced such a dismissal. In the most recent “women’s march” in Washington, D.C., pro-life women’s groups were purposefully excluded. Women who expressed their dislike or disapproval of the march have been met with backlash. Women who articulate the idea that American women aren’t oppressed, or who disagree with various other ideas and policies are accused of being “privileged.” It’s said they don’t understand the plight of women and are forgetting those who fought for things like birth control and women’s suffrage.

This kind of identity politics is positively poisonous.

Moreover, to base one’s opinions and politics around a particular piece of one’s identity isn’t a sign of dedication or self-awareness. It’s a sign of complete and utter ignorance and an inability to reflect on complex issues, in a complicated world, with complicated, multifaceted people. Identity politics places everyone in a box. If someone disagrees with you, this isn’t a time to reflect on your own priors and opinions. It’s time to dismiss their ideas. They’re in a different box. They must be wrong.

I’m voting for Hillary Clinton because she’s a woman.

I’m voting for Donald Trump because he has a comb over.

Both of these statements are equally absurd, but one is viewed as a reasonable way to anchor one’s politics.

Here’s hoping the next few years will usher in a return to critical thinking and movement away from identity politics. As I said to the man on the treadmill, I judge people based on their brains, not their genitals. I’d prefer the same treatment. Keep your identity politics away from my vagina.