Members of Congress Boycotting the Inauguration: What Are They Protesting? 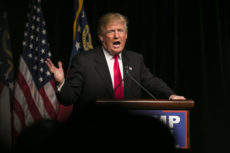 As the inauguration of Donald Trump approaches, this article says “A growing number of Democratic lawmakers are boycotting President-elect Donald Trump’s inauguration,” and “Some members of Congress have said they will be protesting in Washington, D.C., and in their districts instead.” What are they protesting?

The article gives brief statements from 25 Democrats who say they won’t attend, and many say their decisions are based on their being offended by statements Trump has made both before and after the election.

One of the 25 questions the legitimacy of the election, and several mention the likelihood that Trump will promote policies they don’t like. Examples include appointing a Supreme Court Justice, environmental policies, health care reform, and policies that hurt women and immigrants. But Trump hasn’t nominated any Supreme Court Justices, or as president-elect, moved forward on any of these polices, or even been specific about policies he might pursue. These members of Congress are protesting what they think Trump might do, not what he has done.

Those who are protesting things he has said might have a point. Trump has been a fairly reckless wordsmith since winning the election. But Trump did win the election, so the boycotts and protests seem to be expressing their opposition to the democratic political process by which the nation chooses who exercises the power of government.

Members of Congress, who used the system to gain power themselves, object when the system elects someone they don’t like. People who support the system only when the outcome goes their way, and protest it when it doesn’t, are hypocrites.