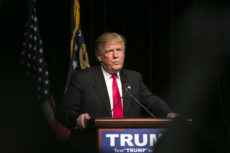 I am the faculty advisor for the Florida State University Students for Liberty. I am guessing that is the reason I received an email from the FSU Students for Democratic Society which says, in part:

Anyone who has been following Donald Trump’s campaign has seen examples of Trump’s racist, xenophobic, and misogynistic, far-right ideology. Supporting the deportation of Muslims, building a wall on the US-Mexico border, and carpet bombing Syria are just a few examples of what Trump is trying to accomplish. ... On January 20th the day of Trump’s inauguration, we are interested in organizing a campus wide walk-out. Afterwards during Trump’s Inauguration ceremony, there will be a protest at the old Capitol Building organized by various progressive groups at FSU, TCC and FAMU.

I replied to the email noting the irony that an organization which claims to support “democratic society” is protesting the outcome of a democratic election. I can well-understand why people might be uneasy about the impending Trump presidency, but it is more difficult to understand why an organization that, by its name, purports to be pro-democracy, would object to the outcome of a democratic election before the person who was democratically elected has even taken office. If Trump eventually engages in anti-democratic actions after he takes office, that might merit a protest by a pro-democracy group. In this case, it appears that the SDS is anti-democratic.

Yes, I know the left-wing history of the SDS. My comment isn’t so much expressing surprise at the group’s dislike for Trump, but rather noting that the Students for Democratic Society is demonstrating by its actions that in fact, it does not support democracy.