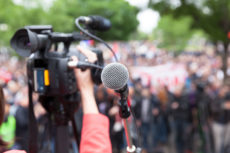 I’m not sure what to think about the anti-Trump protests following the election. If the protests occurred before the election (and there were some), I’d think the protesters were expressing their views that people should not vote for Trump or support his policies. Now that he’s been elected, that decision is behind us, and Trump has done nothing since the election that warrants a protest. What are they protesting?

What I’m seeing in the protesters is an entitlement mentality. A democratic election in which they happily participated didn’t go their way, so they are protesting the outcome that didn’t give them what they wanted. They are acting like spoiled children, maybe because they are spoiled children.

The time to speak out against a candidate is before the election. Afterwards, those who support the democratic process must accept the results. Here’s what Hillary Clinton said:

Last night, I congratulated Donald Trump and offered to work with him on behalf of our country. I hope that he will be a successful president for all Americans.... I still believe in America and I always will. And if you do, then we must accept this result and then look to the future. Donald Trump is going to be our president. We owe him an open mind and the chance to lead.

By their actions, we can see that the protesters don’t agree with their candidate on this point. Why? If they objected to the process by which the president is selected, they should have been demonstrating against that before the election. They just didn’t like the election outcome.

The entitlement mentality that tends to go along with the political left has pushed them to resort to protests and violence when they didn’t get what they thought they deserved.