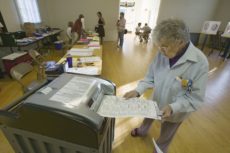 I’m writing this on election day, so I don’t know the outcome of the election. Clinton? Trump? The lesser of two evils is still evil. I conjecture that many people—even Clinton and Trump voters— see it this way, based on some casual evidence: I still see more Obama bumper stickers from the 2012 election than I see Clinton or Trump stickers.

I’m registered as a Libertarian, but the campaign that Gary Johnson and the Libertarians ran eats into any good feelings one might have enjoyed from a Johnson vote. My impression is that Johnson wasn’t running a serious campaign.

Johnson’s greatest visibility came from some widely publicized gaffes that gave the impression that not only is he not prepared to be president, he didn’t even make the effort to prepare. Anyone who kept up with the news would have been able to identify Aleppo and name the North Korean dictator.

The Libertarian Party, more generally, didn’t have a strategy for winning the election. With such high negative ratings for Clinton and Trump, Johnson could have received enough protest votes to put him in the White House, similar to what Jesse Ventura did to be elected Governor of Minnesota in 1998. It’s actually easier (in a way) to win the presidency, because it can be won without getting more votes than the major party candidates.

It’s a Republican House, so they wouldn’t choose Clinton. And the friction between Republican representatives and Trump is well-known. It’s very conceivable they would have been “non-partisan” and chosen Johnson, a former Republican governor, over Trump. President Johnson!

To make that strategy work, the Libertarians should have campaigned heavily in a few states—maybe New Mexico, Colorado, Texas, New Hampshire—to get a few electoral votes. It would not cost much. Rent an RV and drive around to meet and rally the voters, who we know don’t like either Clinton or Trump. Show voters there’s an alternative!

Johnson didn’t need to get more popular votes than Clinton or Trump. He just needed enough to keep them from getting an electoral majority. Libertarians could have run a serious campaign that would have given Johnson a chance to win.

Johnson won’t be the next president, however, because (1) he didn’t appear to be serious about winning, and (2) the Libertarian Party didn’t pursue the winning strategy. So, voters can’t really feel good about voting for Johnson either.

I’m writing on election day, so I don’t know who will be the next president, but I know it won’t be Johnson. I’m disappointed that he and the Libertarians didn’t run a serious campaign.