One Solution to the EpiPen Crisis: Repeal Durham-Humphrey! 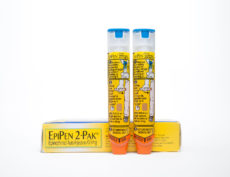 Posturing politicians on Capitol Hill conducted a hearing a few days ago during which they grilled Heather Bresch, CEO of Mylan N.V., maker of EpiPens. Prices of EpiPens have skyrocketed in the past few years (which I have discussed here and here).

The politicians were more interested in wagging their fingers and tut-tutting at Ms. Bresch for the amount of money she has made, than actually figuring out a way to lower the price of EpiPens. (By the way, Ms. Bresch testified she has no intention of reducing prices in response to their badgering.)

If the politicians ever decide to do something serious, here is a proposal: Repeal Durham-Humphrey!

Huh? That doesn’t sound like much of a rallying cry. The Durham-Humphrey Amendment gave the federal government (via the Food and Drug Administration) the power to decide whether a drug is available only by prescription or over-the-counter (OTC). The law passed in 1951, half a century after the FDA was instituted. Even if you believe Congress should keep drugs off the market until the FDA has proven their “safety and efficacy” (which I do not), that does not necessarily imply the FDA should decide whether the drug should be prescribed or dispensed OTC.

The Durham-Humphrey Amendment was passed to increase control over the distribution of amphetamines, but it quickly metastasized to a general federal control over prescribing. Whether it solved the inappropriate consumption of amphetamines is not the topic of this entry, but the continuing flurry of legislation attempting to control the opioid epidemic suggests government has not quite figured out how to deal with drug abuse.

Anyway, what would happen if manufacturers had the ability to decide how to distribute their drugs, via prescription or OTC? EpiPen has one (much less expensive) competing product, Adrenaclick (manufactured by Amedra Pharmaceuticals). However, EpiPen is better known than Adrenaclick and is used colloquially (and wrongly) as a generic name (like Coke and Kleenex are similarly abused).

So, it is hard to break through doctors’ prescribing habits to induce them to prescribe the less expensive Adrenaclick (especially because U.S. doctors are notoriously ill-informed about how much their patients will have to pay for drugs). I suspect if it were free to do so, Amedra might move Adrenaclick OTC to get closer to patients.

Devon Herrick of the National Center for Policy Analysis explains that about one billion dollars’ worth of EpiPens are thrown out unused in the United States, because they need to be immediately at hand but expire after about a year. Pharmacies have evolved into very consumer-friendly retail environments – almost more like supermarkets or department stores than old-chemists’ shops. If patients knew they could walk in and grab an Adrenaclick like a tube of toothpaste, they would not need to stockpile as many injectors as they do when they have to go to a physician for a prescription.

Because so many patients are now paying full price for their prescriptions, this move would grab patients’ attention, and Mylan would likely have to respond by moving EpiPen OTC.

Does this sound too risky? Not in Canada, where both injectors are OTC and EpiPen sells for about $80 (U.S.), about one-eighth the price in the United States. (OTC drugs are sold in a free market in Canada, outside the single-payer system.)

When it comes to regulating EpiPens, the United States should follow Canada’s lead.