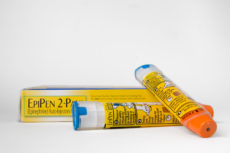 Much has been written about the dramatic price hikes for EpiPen, a product that injects a drug that counters severe allergic reactions (anaphylactic shock). According to Aaron E. Carroll, writing in the New York Times, the real (inflation adjusted) price of EpiPens has risen 4.5 times since 2004.

Both Carrol and the Wall Street Journal have described how government has allowed EpiPen’s manufacturer to hike prices so much. EpiPen is complicated, being both a drug and a device. The drug is very inexpensive, and not patented. The device is protected by patents issued in 2005, which expire in 2025.

First, the government made a couple of interventions in the market that allowed the manufacturer to raise prices above the free-market level. The federal government changed its guidelines such that EpiPens must be sold in packages of two (even though customers might prefer just one, or at least an odd number). Also, the feds gave public-emergency grants to states on the condition that they stockpile EpiPens.

Further, the Food and Drug Administration has hindered other manufacturers’ ability to compete. Those with differentiated products (which do not infringe on the patents) have struggled for market access. A competing device that entered the market in 2013 had to withdraw in 2015 after 26 potential malfunctions in the United States and Canada, in which the device delivered the wrong dose. However, according to the FDA’s own report of the recall:

None of these device malfunction reports have been confirmed. In these reports, patients have described symptoms of the underlying hypersensitivity reaction. No fatal outcomes have been reported among these cases.

In hindsight, we might conclude that a caution might have been a more sensible response than a product recall. By creating an environment in which EpiPen prices are higher than otherwise, the federal government may have made them unaffordable to many families. That will cause more harm than 26 unconfirmed cases of bad dosing by its now unavailable competitor.