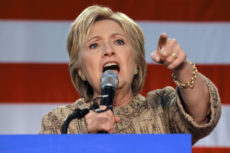 In the Cold War era, Eastern bloc countries prevented their citizens from leaving. The Berlin Wall was the most iconic symbol of the Eastern bloc’s no exit policy. Hillary Clinton’s proposed exit tax “on the untaxed overseas earnings of multinational companies that leave the U.S.” falls short of being a Berlin Wall for U.S. corporations only because it is not as extreme. Its philosophical foundation is the same: prevent those who want to leave the country for better conditions elsewhere from doing so.

Clinton’s economic plan goes further than that. Some U.S. corporations have merged with overseas corporations and moved their headquarters overseas to avoid higher U.S. tax rates, a move known as corporate inversion. Clinton’s website says, “Clinton will prevent inversions and related transactions driven by tax planning to lower corporate tax bills.” She adds that she will “Entirely block inversions that are likely to be the most abusive through a 50% merger threshold.” That’s sounding more like a Berlin Wall.

The United States has always allowed its citizens to leave if they choose to live elsewhere, and has remained desirable enough that more people want to move in than move out. For corporations, that’s not so much the case.

The policies that make some corporations want to leave also place burdens on those corporations that stay. Those policies slow economic growth and produce a lower standard of living for everyone. It is troubling that Clinton thinks we need a Berlin Wall-style policy to keep corporations from leaving, rather than thinking about how to make the U.S. more attractive for corporations, so they want to stay.