When Should We Have to Present a Photo ID? 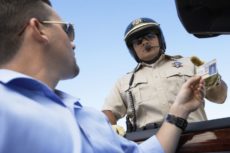 This article explains that a Federal Appeals Court recently struck down a requirement that voters in North Carolina must show a photo ID to vote. I realize that this is a partisan issue and I’m not trying to make a partisan argument. I’m just wondering when it is reasonable to be required to show a photo ID.

If I’m driving a car, the law requires that I carry my driver’s license and present it when asked by law enforcement personnel. Why should I need to present a photo ID to drive a car, when I don’t need one to vote?

(Note that this varies from state to state. Why do I not have the same constitutional rights in one state as another? I live in Florida, where concealed carry is allowed for people who have a permit, but open carry is prohibited even to those with permits.)

The court’s rationale was that their ruling addresses the legacy of racial discrimination in North Carolina. But in that case, requiring a concealed carry permit to exercise one’s Second Amendment rights would appear to be even more discriminatory. First, there is the cost of acquiring the permit, which places a disproportionate burden on the poor. Second, a disproportionate number of blacks have felony convictions, often for victimless “crimes” like drug use, which bars them from getting a permit. The requirement to have a concealed carry permit seems more discriminatory to me than the requirement to show a photo ID to vote.

I’m an economist, not a legal scholar, so maybe there is some legal rationale I don’t understand. But I can’t figure out why the law would allow people to vote without showing a photo ID, but requires one to drive, or to carry a firearm.