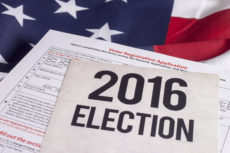 If Johnson picked up enough electoral votes to keep Clinton and Trump from winning outright, the majority Republican House of Representatives would then choose either Clinton, Johnson, or Trump to be the next president. It is easy to see that a Republican House would not choose Clinton, but it is also likely they would favor Johnson over Trump. Johnson is a former Republican governor, but as the Libertarian candidate, choosing Johnson would also be a way for them to claim they are being non-partisan by not choosing the Republican or the Democrat.

For this to happen, Johnson will have to win some electoral votes, which means that rather than running a truly national campaign, the Libertarian party should target a few states that are most likely to swing their way. I have to think that the Libertarian party and the Johnson campaign have already figured this out. Sure, it’s a long shot, but because of the way the electoral college system works, it is well within the realm of possibility.

Gary Johnson could be our next president.