What Bible School Taught Me About Taxes 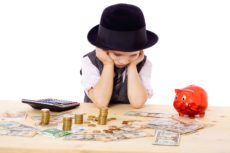 One of my first lessons in economics and politics came from an unlikely place—vacation Bible school.

I must have been about six or seven. For a week, I went to church to learn with other children my age about our faith and the Church.

Throughout the week we had the opportunity to earn stickers. For things like good behavior, helping the teachers, participating, and playing games, we received small happy face stickers. At the end of the week, we could “spend” these stickers at their store—exchanging what we’d earned for trinkets. (It’s amazing what a second grader will do for a plastic slinky.)

I remember the day all my work was going to pay off. I’d accumulated a good amount of stickers and I was so ready to use what I’d worked for to get what I wanted.

Then came the catch.

Our teacher told us it was time for us to “spend” our stickers. She then asked us to reflect on how many stickers we had—and how many our peers had accumulated. We were asked to consider giving some of our stickers to those who had less. I examined my stickers, thought about what I wanted, and elected to give some of my stickers away.

My teacher asked how many stickers I would donate. When I told her, I remember being surprised at her reaction. She told me that, compared to what I had, I wasn’t really giving much away. I shouldn’t be selfish. Wouldn’t I like to make the class more equal? There were a few people in class, in particular, who had but a few stickers.

I remember explicitly saying, “No! I worked hard for my stickers!”

My young mind was full of questions. Why should I give away what I’d earned to people who didn’t work as hard? She told me that we should want equality–it’s the job of the rich to give to the poor.

Caving to pressure from my teacher, and not wanting to disappoint, I relented, and gave away more of stickers—and felt very cross about it. I didn’t feel good about what I had done. I’d been coerced into giving away more of my wealth than I wanted because someone thought my stickers should be given to someone else.

While I can appreciate the lesson the woman was trying to teach me about generosity, empathy, and charity, I think the greater lesson was one I wouldn’t appreciate until years later.

In my adult life, I still work for “stickers.” I chase the dollar like everyone else, working so my husband and I can pay our mortgage, student loans, car payments, go out to dinner once a week, and save for retirement. We do just fine, but we aren’t “rich” by most definitions.

And in my adult life, I’m still, begrudgingly and unwillingly, giving stickers away. Except instead of a Bible school teacher suggesting I give away my hard-earned treasure because it’s what’s “right,” it’s the government saying, “give us 30 percent of your income and we won’t put you in jail.”

As a child, I didn’t know where my stickers were going. Maybe they went to someone who wasn’t very good at winning games or sitting still through no fault of their own. Maybe, however, they went to those kids who had no stickers because they hadn’t done anything to earn them. Perhaps they’d misbehaved all week. Were they the ones who would be getting my stickers?

In a similar way, I have no way to trace my tax dollars. I know that the money I “give” to the government on a yearly basis goes to things I might consider giving money to if I weren’t obligated—education, infrastructure, and healthcare. (Note, I can’t say I’m a fan of government infrastructure programs, and I’m certainly not a proponent of government-run education or healthcare, so my hypothetical giving ought not be taken as an endorsement.)

I also know my money goes to things I’d likely never support—like war. If given the option, none of my money would ever go to fund the perpetual “wars” on drugs and terror. I wouldn’t give money to programs that subsidize domestic producers at the expense of foreign producers and domestic consumers. I wouldn’t give money to programs launching drones along the U.S. border in the name of “national security.”

Alas, I don’t have that choice.

As an elementary school student, I didn’t have the ability to articulate my problem with giving away my stickers. Even if I had, I doubt it would have made a difference in that context. But now I understand why I was so incredibly bothered.

My rights were violated.

Now some may say these two examples are disconnected, but I disagree. Perhaps an example is illustrative. Suppose you have two individuals—Peter and Paul. Suppose further that Peter is wealthy. Paul, in seeing the wealth Peter has accumulated, suggests to Peter his money could be used for a variety of worthy causes. Peter refuses. Paul, angered by Peter’s callous and selfish behavior, later breaks into Peter’s house, steals his money, and “donates” it to said worthy causes.

Would you say that Paul was acting appropriately? No! You’d say that Paul is a thief! You’d be correct. He has no right to Peter’s property, to compel him to use it for whatever reason.

Yet, we’re confronted with “Pauls” on a regular basis. But Paul doesn’t act alone. Instead, he lobbies government to steal money on his behalf. Peter’s money goes to whatever government decides is right—Peter’s beliefs, preferences, and moral compass be damned. Peter’s conscience falls victim to some supposed “collective good.”

I’m grateful for the lesson I learned so long ago. Indeed, giving away my stickers at Bible school probable did teach me something about generosity and helping those who are less fortunate. But it also taught me something about moral philosophy, myself, and our interactions with the state.

Abigail R. Hall is a Research Fellow at the Independent Institute and an Assistant Professor of Economics at the University of Tampa.
Posts by Abigail R. Hall | Full Biography and Publications
Bible Education rights school Taxation taxation as theft Taxes
Comments
Before posting, please read our Comment Policy.