Old Enough to Choose a President, but Not to Buy Cigarettes? 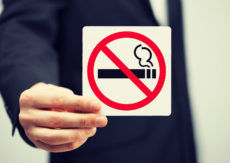 Once again, with Gov. Jerry Brown’s blessing, lawmakers in California have extended the long nose of government further into the private lives of their citizens. The latest intrusion comes from legislation that raises the minimum age for buying cigarettes and other tobacco products from 18 to 21 years old. With record-level support for marijuana legalization, and general recognition that the “War on Drugs” has failed, it seems odd to be moving backwards on tobacco.

Readers of a certain age may remember hearing young men deployed to the jungles of Southeast Asia complain that they were old enough to die for their country, but not old enough to vote. Eighteen year olds now can vote, of course, but California has joined Hawaii in prohibiting all of them (plus 19- and 20-year-olds)—except active duty military personnel—from buying cigarettes legally.

What accounts for the push to ban smoking by young adults, including regulating electronic cigarettes, which do not contain tobacco? One answer is that “vaping” is a substitute for smoking regular cigarettes and choosing that alternative cuts into tobacco tax revenues, which, if passed in November, Prop. 30 proposes raising from 87 cents to $2 per pack.

Supporters of stricter tobacco controls justify new restrictions on the grounds of promoting public health by significantly reducing youth smoking and smoking-related diseases drain on public healthcare resources, especially by Medicaid recipients. That argument, however, doesn’t get to the root of the problem.

The core issue is not that smokers make unhealthy choices—people endanger their own well-being in countless ways—but rather that the government makes other people pay for those choices.

Fortunately, cigarette taxes and age-based prohibitions are not the only strategies for reducing tobacco use. Research by Simon Chapman of the University of Sydney shows that education and awareness campaigns effectively discourage smoking. The American Cancer Society, which spends money on prevention as well as research, is funded almost entirely by private donations. The Society’s 2014 combined financial statements report that government funds account for only 0.57 percent of its total revenue.

Social stigma, including disapproval by friends and family members, also reduces tobacco consumption, according to research published in the journal Social Science & Medicine. A 2014 Gallup report shows that Utah has the lowest smoking rate in the United States. Instructions disseminated by that state’s dominant religion, the Church of Jesus Christ of Latter-day Saints, effectively discourage tobacco use without resorting to the heavy hand of government enforcement.

For these reasons and others, the rate of cigarette smoking among U.S. adults, according to data from the Center for Disease Control, more than halved from 1965 to 2013, falling from about 42 percent, shortly after the U.S. Surgeon General first linked cigarette smoking to lung cancer, to around 17 percent. The percentage of high school students who smoke has declined at a similar pace after peaking in the late 1990s.

Legislation restricting young people’s access to cigarettes doesn’t mean that adults under 21 will stop smoking altogether. Such laws fail to address the demand side of the market. New York’s experience is instructive: Largely because of the titanic tax that it places on cigarettes, almost 60 percent of the cigarettes sold in New York are smuggled into the state, according to the Tax Foundation.

Do California’s lawmakers think that young people there will not try to evade tobacco restrictions as New Yorkers do? (California has criminalized selling tobacco products, but not consuming them.) Despite prohibitively high cigarette taxes, the teen smoking rate in the Empire State is down only 1.2 percent from 2011 levels. Supply-side attempts to restrict what people consume simply won’t work with cigarettes, just as they failed with alcohol during Prohibition.

The moral assumptions underlying the case for raising age restrictions on tobacco to 21 may be the worst of all. It is absurd to claim that 18-year-olds are too young to buy a pack of cigarettes, but are mature enough to consent to sex, marry, or vote. It is a double standard that threatens the protection of all personal choices, even the ones still considered sacrosanct.

We may not like the decisions other people make, but we must let them live their own lives. Restricting the choices available to young adults unfairly treats them as second-class citizens. Lawmakers should let adults be adults and allow them to make their own decisions because they are worthy of our respect as equal, autonomous human beings.