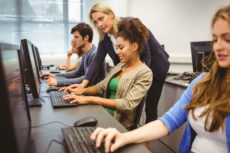 It’s National Teacher Appreciation Week, but many teachers don’t feel all that appreciated.

According to a recent US Department of Education survey, teachers’ perceptions about how much autonomy they have in the classroom has steadily declined since 2003—which corresponds with increasingly intrusive federal education mandates over testing, standards, and curriculum.

In particular, opposition to Common Core among teachers has quadrupled since 2013 and now stands at 50 percent.

Common Core is being blamed, at least in part, for the teacher shortages being reported from coast to coast, and by a margin of about 5 to 1 teachers would not recommend entering the profession.

This wasn’t supposed to happen.

Back in 1978 President Jimmy Carter promised that creating a US Department of Education would “reduce Federal regulations and reporting requirements and cut duplication; [and] assist school districts, teachers, and parents to make better use of local resources and ingenuity.”

History shows the US education department has not fulfilled its promises to teachers.

Similarly, expenditures dedicated to instruction dropped from 57 percent to less than 54 percent over the same period.

Meanwhile, even as the proportion of administrators and associated funding keeps rising, the proportion of teachers reporting that routine paperwork is interfering with their instructional duties has remained constant at around 70 percent.

Teachers would be much better off if parents were in charge of their children’s education dollars.

Ask any parent what makes a school great, and chances are they’ll say it’s the teachers (see here and here)—not administrative Taj Mahals.

If parents held the purse strings, teachers and their classrooms would be funded accordingly—likely on levels that matched or exceeded current administrative salaries. Here’s how.

Imagine if associated education funding were put into student education savings accounts (ESAs) instead of being funneled through DC, state, and district bureaucracies.

Per-pupil funding now averages about $11,000 (excluding construction and debt). Class sizes and pupil/teacher ratios vary between 16 and 27 students depending on grade level, school size, and how students and teachers are counted. For illustrative purposes (and easier math) let’s assume an average of 20 students per class. That’s $220,000 per classroom. Assuming (very generously) that 20 percent would go to administration and overhead, $44,000, that would leave $176,000 for the classroom—plenty of money for books, classroom supplies, and six-figure teacher salaries.

These salary amounts are possible right now, but imagine the positive changes that would occur over time with parents in charge of their children’s education dollars.

Given the critical importance each individual teacher would play in attracting and retaining students, there would be powerful pressure on education providers to recruit, retain, and reward the best and brightest. Teachers would have their pick of employers. Even if particular education providers could not offer the highest salaries, they could compete by offering teachers truly professional, rewarding work environments—perhaps the most important factor for teachers.

Teachers, in turn, would be empowered over developing curricula, selecting classroom materials, and working with parents to customize student learning and assessments. Over time, there would be little or no need for teams of superintendents, assistant superintendents, curriculum specialists and supervisors, or public relations staff—all of whom currently earn around two to three times what teachers do.

Proponents promised that a US Department of Education would be a boon for teachers. “Bureaucratic boondoggle,” as President Ronald Reagan called it, appears to be more accurate.