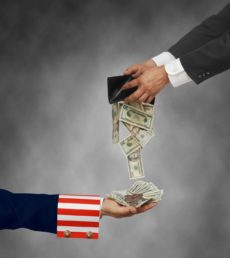 Here’s an article about Warren Buffet’s well-known view that the rich should pay more in taxes. His bottom-line argument is, “If you’re in the luckiest 1% of humanity, you owe it to the rest of humanity to think about the other 99%.” I don’t disagree.

We could debate whether the spending government undertakes really benefits the rest of humanity. Does the welfare state help those in poverty, or leave them in a welfare trap? Does government involvement in health care really make it more available and more affordable? But that has nothing to do with my disagreement with Buffet here.

Regardless of the merits of government spending, the more people are forced to pay in taxes, the less they have left that they could use of their own free will to help out the rest of humanity.

Buffet himself has been very charitable, and I’m happy for him to encourage other people to be more charitable. But he’s seriously mistaken to equate the force of government with thinking about the rest of humanity.