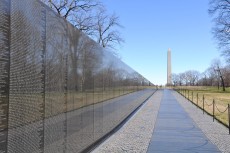 Washington, D.C. is home to a host of memorials. Walk in any direction for long and you’re bound to run into at least one of them. By far, the memorial that generates the strongest reaction from me is the Vietnam memorial. The name of all the U.S. casualties are chiseled on the wall, from the start of the war to end. Someone is always there crying or making a rubbing of their loved-one’s name. What resonates with me about the memorial is that it’s strikingly cold, but hauntingly personal. It’s amazing how much emotion a name can generate—even on you don’t know. When I think that many of these men went to their deaths without a choice (as they were drafted), it’s hard to not feel emotional.

Certainly, the war memorials are full of tributes to the oft-citied “sacrifices of brave men and women who gave their lives defending our freedom.”

Although the city is full of memorials, there’s one group, one who arguably paid the highest price for all of the U.S. government’s interventions, for whom no memorial has been erected. It’s doubtful one will ever be built.

How could this be? What group has been denied honor in the nation’s Capitol?

It’s estimated that between 85 and 90 percent of deaths in war are civilians. Put differently, for every combatant killed in a conflict, nearly ten civilians lose their life.

If you look at the casualties commemorated in the memorials, the tolls are far from trivial. If we look at the data on injuries and fatalities sustained during U.S. conflicts, it is true many military personnel paid a high price for the U.S.’ activities.

Between the Revolutionary War, War of 1812, Mexican-American War, Civil War, Spanish-American War, WWI, WWII, the Korean and Vietnam Wars, and the First Gulf War, over one million military personnel have been killed. Another 1.4 million were wounded. To put this into perspective, this would be as if the entire population of Indianapolis disappeared and every resident of Chicago wound up in the hospital.

Contrast these statistics with the number of civilian casualties caused by U.S. conflicts. Even if we completely ignore the wars with the highest casualties (WWI and WWII), the civilian death toll from U.S. conflicts is staggering. An estimated 2 million civilians died during the Korean War. Many of these deaths were the result of U.S. military actions and not those of the North Koreans.

Again, to put these numbers in context, it would be as though we woke up tomorrow and everyone in the city of Los Angeles had been killed as a result of war.

The question to ask is here is why? Why ignore the sacrifices of these millions of men, women, and children? If their sacrifice was truly “for sake of our freedom,” should they not be honored among U.S. military personnel—some of the individuals directly responsible for their deaths?

The answer to this question is complex, but at its core the answer is simple.

First, no government official wants to popularize the number of civilians killed while our “brave warriors” are out “defending freedom.” If citizens were truly aware of the pain and suffering caused by conflict, they may less inclined to support it. (Alas, the decline of “defensive operations” lacks appeal for those sustained by an extensive military-industrial complex.) Ignoring the human cost of such conflicts is particularly convenient for many people.

Second, most citizens don’t want to recognize the number of civilians killed as a result of our government. We (citizens) ignore the deaths of millions of civilians because it cuts directly against rampant nationalist rhetoric and the cult of American exceptionalism. The cry of “we’re number one” is a lot less appealing when, “at killing lots of people” is at the end of it. Admitting that these actions have caused the deaths of millions requires us to question the narrative that what the American government has done “for freedom” is righteous. If we admit that we fell prey to the idea of “getting the commies, terrorists, etc.” we are forced to turn a critical mirror to our own faces, and admit we supported decisions which caused mass amounts of pain, suffering, and death.

Taken together, this sets the stage for the U.S. government to undertake more aggressive activities abroad, leading to more conflict, more death, and more groups who harbor deep hatred for the United States. Of the 248 conflicts launched since the end of WWII, the U.S. has started or been party to 201, or 80 percent of them. In the years to come, many of these conflicts will be memorialized. Sadly, most of those who paid the ultimate price for the U.S.’ adventures abroad will be forgotten and further disrespected by the continued glorification of war.