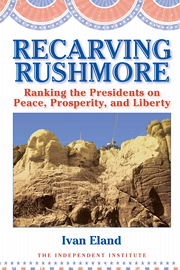 Presidents’ Day should itself remind us that the executive branch has expanded its power way beyond what the nation’s founders had intended at the Constitutional Convention in 1787. We don’t have a “Congress or Judiciary Day.” The day celebrates powerful executives as caricatured celebrities.

The founders had envisioned Congress, as the dominant branch of government, to be the people’s branch. The intent of a restrained executive is summarily illustrated with the founders’ creation of a chief executive called a president—“one who presides”—rather than called a governor—then a more powerful title indicating “one who governs.”

Yet over time, the executive power has surged from the usurpation of congressional powers and Congress’ willingness to abdicate such powers. As I illustrate in Recarving Rushmore: Ranking the Presidents on Peace, Prosperity, and Liberty, the evaluations of our presidents are often based on individual charisma, activism, and service during periods of crisis. Virtually ignored are the shifts in power that are transforming the executive branch into a governing branch:

It will be difficult to stuff such unconstitutional executive power back into the bottle; but for the sake of the continuation of governance under a republic, it is vital. Most of the ‘excellent’ presidents I suggest in Recarving Rushmore are remembered as bland men with gray personalities, but they largely respected the Constitution’s intention of limiting government and restraining executive power, especially in regard to making war. They realized that America is great not because of its government’s activism at home and abroad, but because of the hard work and great ideas of private American citizens living in freedom. In other words, they realized that peace, prosperity, and liberty are best achieved by the framers’ notion of restricting government power.