President Joe Biden’s student loan cancellation scheme is a very bad fiscal policy. But now, it may soon be at risk of collapse. The President himself put it in jeopardy, thanks in no small part to his 60 Minutes interview that aired on Sunday, September 18, 2022.

On 60 Minutes this evening, President admitted aloud that his decision to transfer up to a trillion dollars in student-loan debt to taxpayers without congressional approval is flatly unconstitutional:

“The pandemic is over. We still have a problem with COVID. We’re still doing a lot of work on it. But the pandemic is over,” President Biden tells 60 Minutes in an interview in Detroit. https://t.co/7SixTE3OMT pic.twitter.com/s5fyjRpYuX

Why does Biden’s statement matter so much? I’ll tell you: It matters because the memo that the Biden administration released to justify his order rested entirely upon there being an ongoing emergency, and because, as Biden has just confirmed, there is no ongoing emergency.

Click through to Cooke’s article to learn what else is legally wrong with President Biden’s student loan cancellation scheme. I’m more interested in that trillion-dollar cost being transferred to American taxpayers. Where does that figure come from?

One Trillion of National Debt to Fund Student Loans

This may come as a surprise, but the U.S. government has never had the money to fund the Federal Direct Student Loan program. It has had to borrow to get that cash. Since President Barack Obama signed the legislation for the government takeover on March 30, 2010, the federal government has borrowed over $1 trillion. 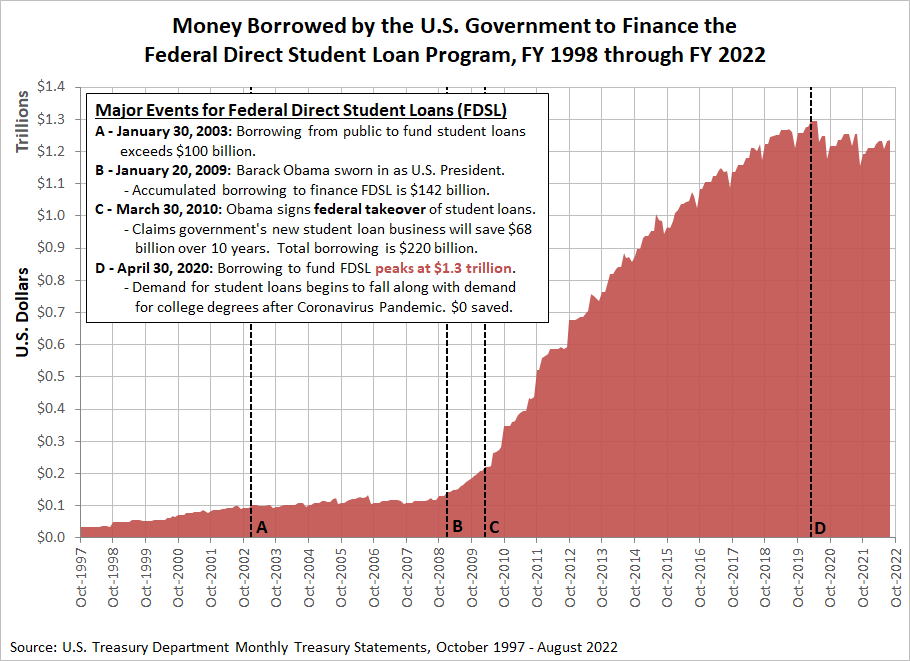 That’s money that still needs to be paid back to the people who lent money to the U.S. government. Those people expect to be paid back in real money, which will come from taxpayers. That means sticking the cost of student loan cancellation on the majority of Americans who never borrowed a dime to pay for a college degree. That also means sticking the cost of debt cancellation on millions of Americans who fully paid off their student loans, so they’ll get to pay for student loans twice under Biden’s scheme. Full disclosure: I’m in that second category.

It also means the Federal Direct Student Loan program will never deliver the savings promised by President Obama. Here’s how he sold it back in 2010:

President Obama’s deal never delivered those savings. Meanwhile, President Biden’s student loan cancellation scheme is an even worse deal. Follow this link to find out how much worse it gets when you dig into its details and discover how it effectively taxes mechanical engineers to pay for drama majors. Full disclosure: I earned a degree in mechanical engineering.

In truth, nobody needs a college degree to recognize President Biden’s student loan cancellation scheme is a very bad fiscal policy. We shouldn’t have to wait for a court to admit it’s unconstitutional to pull the plug on it. President Biden should face up to reality and do it on his own.