Uncle Sam has a stealthy plan to force Americans to pay higher taxes. The Congressional Budget Office let the cat out of the bag on that plan in its 2022 Long-Term Budget Outlook.

Before I go any further, here’s the most important chart from the CBO’s report. It shows how much money the CBO’s analysts expect the federal government will spend and collect over the next 30 years.

The chart shows the U.S. government’s tax collections rising slowly and steadily as a share of GDP over that period. That trend is pretty impressive, considering the CBO’s report assumes there won’t be any increases in tax rates. How does that work?

You have to read further into the report to find the CBO’s analysts are counting on three things to increase Uncle Sam’s revenues. Here’s their list, ranked in order from smallest to largest, for their long-term impact:

The CBO’s analysts created the chart below to visualize how much these factors will increase the federal government’s tax collections as a percent of GDP: 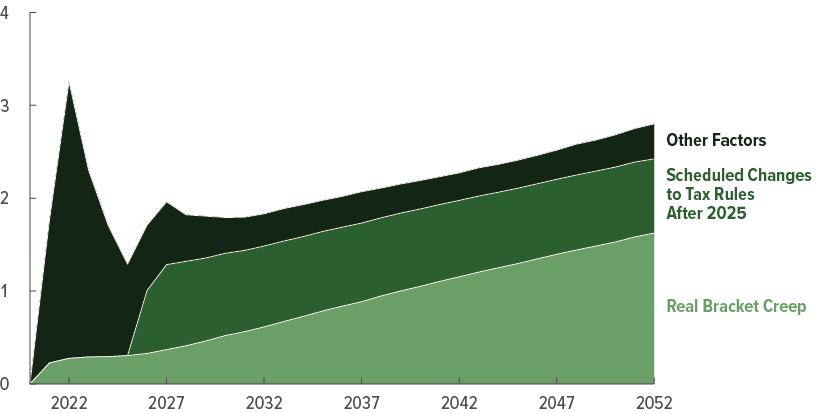 Here’s the CBO’s description of how real bracket creep works:

The largest contributor to growth in projected revenues over the long term is real bracket creep—the process in which, as income rises faster than inflation, a larger proportion of income becomes subject to higher tax rates. As the share of income taxed at higher rates grows, the share exempt from taxation shrinks.

This happens because the CBO’s analysts believe the IRS’ annual inflation adjustments won’t keep up with the inflation rate.

Inflation Is a Stealth Tax

Money Matters host Marc Cuniberti describes how that situation will harm Americans over the long run:

The stealthy part of inflation is that it also causes salaries to rise, increases home values and retirement accounts. This increase gives the illusion that things are improving. Nothing could be farther from the truth. Because wages never keep up with the overall price increases in the economy (called wage/price lag) people are left wondering why they find it harder to make ends meet despite rising salaries, retirement balances and home values.

Americans will have even less money to make ends meet because of their higher tax bills from inflation-driven real bracket creep. In that respect, inflation really is a stealth tax.