The Congressional Budget Office issued its Long-Term Budget Outlook for 2022 last week. The CBO’s view of the U.S. government’s fiscal future is, as always, really depressing. However, the new report drives home what the CBO’s analysts see as the most prominent fiscal threat to Americans: the U.S. national debt.

The analysts don’t come flat out and say it, but that’s the clear takeaway from the figures they used to illustrate the report’s visual summary. Here is the closely related pair of charts they’ve used to send that message: 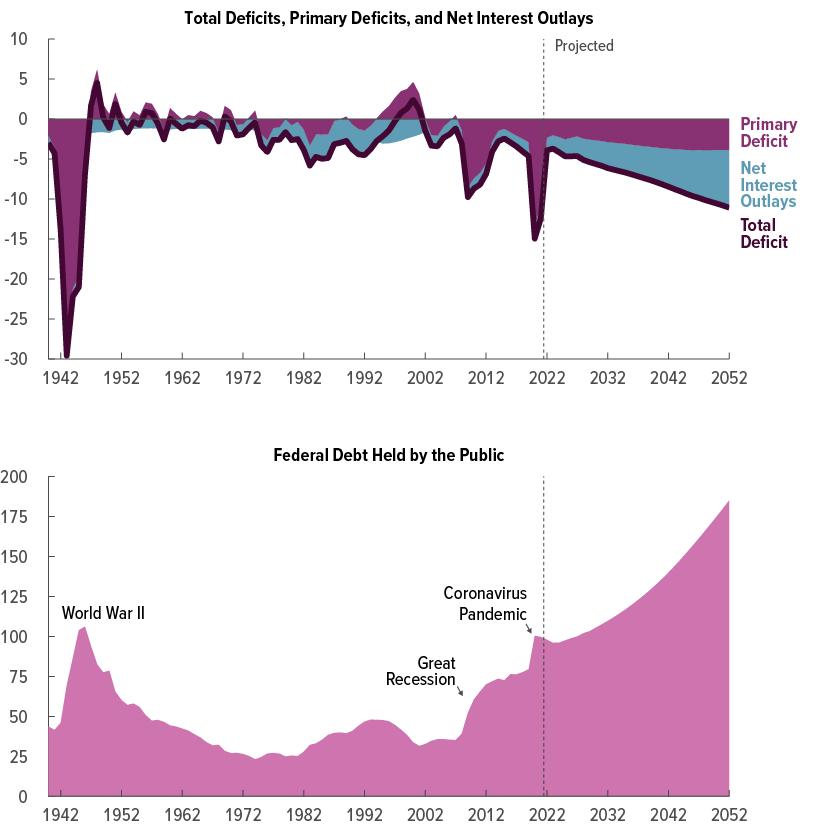 Here’s their caption for these charts:

Those persistently growing deficits push federal debt held by the public, which is already high, further up throughout the 30-year period – to 185 percent of GDP in 2052. Such debt would continue to rise thereafter.

The Biggest Fiscal Threat to Americans

Net interest outlays represent the cash the U.S. government must pay to the creditors from whom it borrowed to pay for its excessive spending. The CBO’s analysts identify the combination of already having a high national debt with rising interest rates on that debt as the nation’s biggest fiscal problem. They project this combination will cause exponential growth in the national debt over the next 30 years.

The CBO continues to describe the trouble that follows from the federal government’s state of fiscal affairs:

Such high and rising debt could have significant economic and financial consequences. It could, among other things, slow economic growth, drive up interest payments to foreign holders of U.S. debt, elevate the risk of a fiscal crisis, increase the likelihood of less abrupt adverse effects, make the U.S. fiscal position more vulnerable to an increase in interest rates, and cause lawmakers to feel more constrained in their policy choices.

The CBO’s analysts are using very polite language concerning lawmakers, saying they will “feel more constrained in their policy choices.” After all, they work for them, and their desire to remain employed may constrain them from being blunt.

I don’t work for them, so I’ll put it plainly. Elected politicians will be forced to dial back their excessive spending, or else they’ll have an even bigger fiscal crisis on their hands.

It’s all because the sins of their past excessive spending have caught up to them. Whether they appreciate it or not, lawmakers are already in a situation where they have nothing but bad options to choose among. Reining in their current and future excessive spending plans is simply the least painful option for most Americans.