How High Can Uncle Sam Afford Interest Rates to Rise?

How high can Uncle Sam afford interest rates to rise?

That has become more than an academic question since President Biden signed the American Rescue Plan Act into law in March 2021. The act marked the beginning of a surge of inflation for American consumers, which reached 9.1% in June 2022.

The Federal Reserve has been hiking interest rates to fight that inflation. Since March 2021, the Federal Funds Rate has risen from 0.07% in March 2021 to 1.21% in June 2021, with another .07 increase recently announced. That increase is forcing the interest rates the U.S. government pays on the trillions it borrows to rise as well.

With rising interest rates, the amount of interest the government pays to its creditors is rising as well. That’s a bill the U.S. government cannot afford to miss paying. The alternative is defaulting on the national debt. From a very practical perspective, the U.S. government must spend the money it collects to pay the interest it owes before it can spend any other money.

A rising cost for paying the interest it owes means the government has less money to spend on everything else. How high can the cost of paying interest on borrowed money rise before politicians have to do something about it?

Uncle Sam’s Cost of Borrowing as a Percent of Spending

I used numbers from President Biden’s FY 2023 budget proposal to find out what just a half percent interest rate increase would do. I used this percentage increase because even though rates have risen by more than a full percent already, Uncle Sam’s debt includes money borrowed at lower rates for longer terms. That older debt reduces the impact of today’s higher interest rates.

But only so far. The chart below shows how much higher the government’s cost of net interest changes with that higher than forecast increase in interest rates. 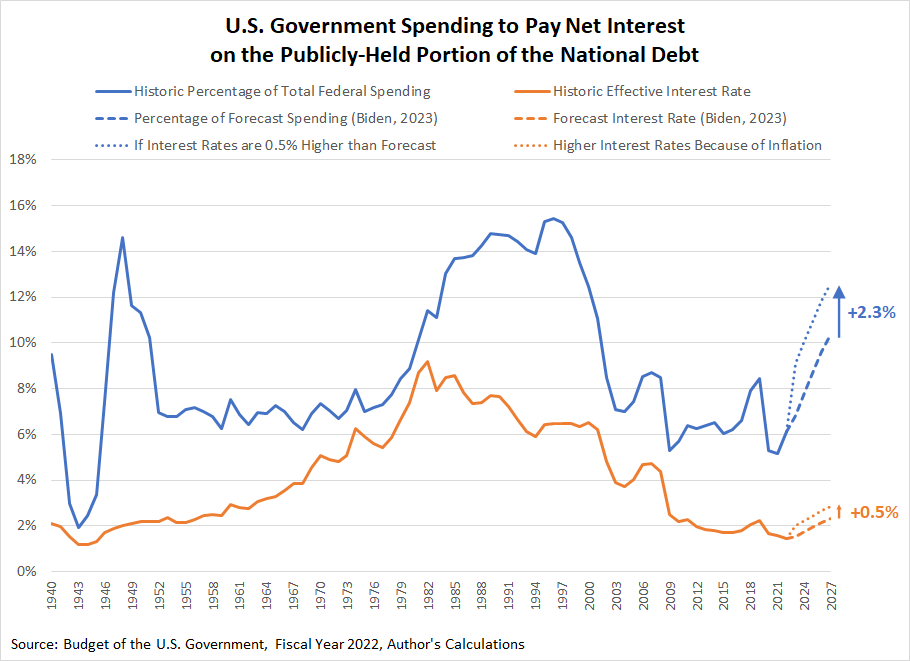 By 2027, a half percent increase in the effective interest rate paid by the federal government on the portion of the national debt held by the public has quite an impact. It would reduce the amount of money President Biden proposes to spend that year by 2.3%.

That may not sound like much, but remember, that’s with just a half percent increase in the effective interest rate Uncle Sam pays on the national debt. A full percentage point increase in interest rates would boost that to 4.5%. How high would that number need to rise before it forces politicians to act because it prevents them from spending as much money as they want on everything else?

Sure, they could keep doing the same things that have caused this problem and borrow even more to pay for it all. But wouldn’t that be the most stupid thing for the government to do in this situation? Borrowing more to pay for its increasing cost of borrowing is not a sustainable fiscal policy. There’s a reason why this fiscal policy is called a debt death spiral.

Something else would have to give. That means either cutting spending to more sustainable levels, or it means hiking taxes to try to prop up its excessive spending. Either way, today’s inflation will force politicians to choose from a menu of what they consider to be bad options.

That brings us to Herbert Stein’s law: “If something cannot go on forever, it will stop. ” The only remaining questions are how and when.