For a “small” movie with a production budget of just $10 million, those wins were a hefty catch. Film critics and industry watchers didn’t expect CODA, an acronym for Child Of Deaf Adults, to toe the line with industry favorites such as Jane Campion’s sweeping Western epic The Power of the Dog or Kenneth Branagh’s autobiographical coming of age masterpiece Belfast.

But prevail it did. In the process, CODA became the first movie distributed by a streaming service to win best picture.

Perhaps even more culturally relevant, however, is the fact that CODA was the first film with predominantly deaf characters in leading roles to win these major awards.

Given the odds, and the presence of more favored films by industry heavyweights, was CODA’s success a nod to contemporary “woke” politics?

A Small Movie With Everyday Relevance

Other contenders released in 2021 featured traditional liberal or “woke” themes much more prominently. Don’t Look Up was a star-studded ensemble satirical comedy allegory about climate change. King Richard put racism at the center of Serena and Vanessa Williams’ heroic march to the pinnacle of the white professional tennis world. The Power of the Dog put gay sexual identity at the center of its plot revolving around toxic masculinity in the American West. Steven Spielberg’s update to West Side Story paid homage to transgenderism by recentering a minor but important character. (My review of West Side Story can be found here.)

Instead, the academy voters chose to honor a story that is remarkably “normal.” CODA doesn’t carry the anger, society-wide frustration, or abrasiveness of Richard Williams’s drive to push his children to greatness. The movie also doesn’t tackle head on American myth.

Rather, CODA’s story centers on a teenage girl trying to discover her own sense of self while grappling with fears, anxieties, and frustrations common to most families raising children.

The fact she is the only hearing child of a deaf family creates a compelling story. Its story is also one that deeply resonates with a universal human experience. 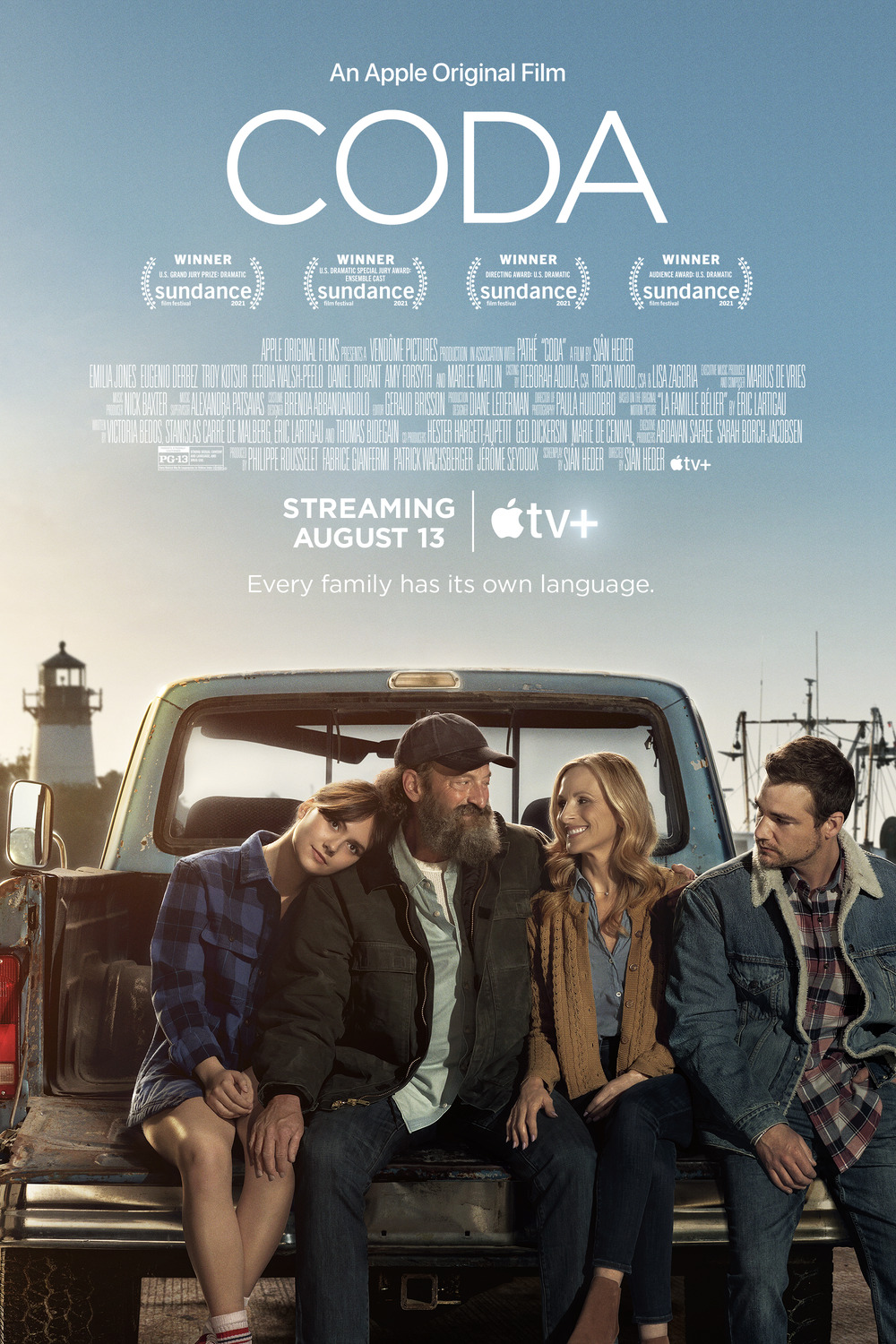 An Everyday Drama About “Leaving the Nest”?

Set in Gloucester, Massachusetts, a traditional fishing town north of Boston, Ruby Rossi (Emilia Jones) is the only hearing member of a deaf family. She is part of a multigenerational fishing family. But the burden of communicating with the outside world falls squarely on her shoulders.

Her brother Leo (deaf actor Daniel Durant) wants more responsibility for the business and working with the fishing community. But their parents, Frank (Troy Kotsur) and Jackie (Marlee Matlin), believe he is not ready. They also don’t believe the fishing community will continue to accept them without Ruby.

But Ruby’s real talent and passion is not running the family business. It’s singing. When her chorus teacher (Eugenio Derbez) discovers her voice, he encourages her to apply to the prestigious Berklee College of Music in Boston.

Frank and Jackie are forced to confront a reality that is familiar to almost all parents: Are your children ready to leave the proverbial nest? More importantly, are the parents willing to let them go?

What is extraordinary about CODA is how unpatronizing and effective the movie normalizes deaf families and relationships. Ruby, while faced with an extraordinary responsibility, is not faced with pressures out of step with other children raised in close-knit small family businesses with few resources.

The movie doesn’t shy away from the challenges of growing up in a family whose parents are “different.” While Ruby is heckled and bullied by the “cool” girls in her school, just about anyone can identify with her feelings of being an outcast. Just ask the school nerd, the kid with the weird accent, the socially awkward child, or many autistic children.

CODA, however, also shows the complexity of these family dynamics. When Ruby is born hearing, and as she grows up, the family become dependent on her. They retreat into their own world, distancing themselves from the larger world.

First generation immigrant families who are non-native English speakers, to name one group, face similar challenges and ostracization. Children of non-native language speakers often adapt in similar ways to Ruby—working to fit in by adopting local languages, cultural priorities, and patterns. In some cases, they disassociate with their native language and cultures. This behavior, rooted in human development, creates tensions within their families and between generations.

In CODA, anyone who feels out of place or separate from their larger community or social environment can relate to the Rossi family’s predicament. The brilliance of CODA is its ability to provide Ruby’s experience in a context that is broadly relatable.

The core of the story, wisely, focuses on Ruby’s attempt to find her own identity. The dialogue doesn’t descend into platitudes or politics. Rather, the story stays focused on straddling Ruby’s obligations to her family and her own need to become independent and pursue her own dreams.

The plot is driven to its climax when a financial tragedy befalls the Rossi family through no fault of their own. The twist reflects a surprisingly complex layer to the story. As the fishing community struggles with meeting quotas, commercial fishing boats departing Gloucester are required to allow, and pay for, a government “observer” on their boat. The federal official will monitor their catch to ensure it does not exceed the quota. The Rossi’s, like their fellow fishers, are barely making ends meet. The additional cost of funding a regulator nearly forces them out of business.

But the real threat comes from the unsympathetic observer who calls the Coast Guard for violation of a perceived safety violation without regard to history or the family’s performance.

While controversial within the deaf community, the choice by writer-director Sian Heder, who is a hearing person, to use Ruby’s extraordinary voice as the vehicle for finding her individual identity is a powerful bridge to the mainstream hearing community. Ruby’s artistry elicits both empathy as well as an appreciation for the coming of age process to the human experience. Few other creative choices could draw out the personal conflicts and dynamics faced by CODA families for the hearing community.

CODA will also undoubtedly help break down barriers for the deaf community of actors and actresses. Marlee Matlin, herself an academy award winner, used her influence in the industry to ensure deaf actors were cast in key parts. Sian Heder’s brilliant screenwriting has shown how deaf character storylines can be woven seamlessly into mainstream themes and stories.

Ultimately, CODA success becomes a story of how understanding, empathy, loyalty, and finding individual identity can be thwarted and then triumph in the face of what may seem like insurmountable odds. These are universal human desires and hopes. They are not framed by political context, moral relativism, or a moment in human history or culture.

The Academy of Motion Picture Arts and Sciences voters got this choice right.