Good news! Instead of going broke in 2033, Social Security’s Old Age and Survivors’ Insurance (OASI) trust fund will run out of money in 2034. If the program’s Disability Insurance (DI) trust fund is diverted to pay retirement benefits, it will last until 2035!

That’s the latest projection from Social Security’s trustees, who released their 2022 annual report last week. If you’re on track to be collecting Social Security benefits in 2034 or after, here’s what that will most likely mean:

Here’s the Trustees’ chart illustrating when benefits will be cut and by how much under current law: 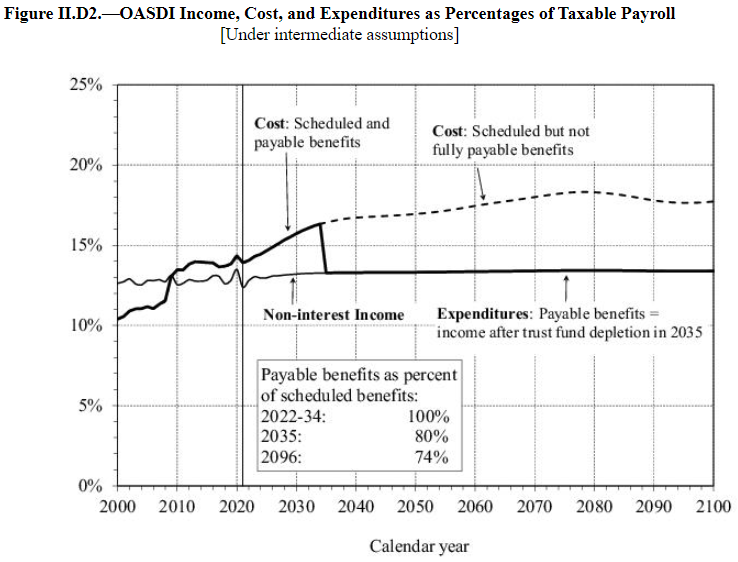 Those benefit reductions are also good news. A year ago, the cuts were projected to be bigger. Now, retired Americans relying on Social Security benefits will only lose 20 cents of every dollar they might have been expecting. That’s a promise by the politicians who set Social Security’s funding and benefits on their current scheme.

Social Security’s Trustees have also updated their estimates of what it would cost to keep the trust funds from depleting. Here’s a summary of their hypothetical solutions:

Each of these solutions would, by themselves, make it possible for Social Security to pay out benefits for nearly another 75 years without any other adjustments. At least, according to the Trustee’s intermediate assumptions, which fall between their best and worst case scenarios.

What should the real solution be? The Committee for a Responsible Federal Budget has an interactive tool where you can try out your own reform with a lot more options than the Trustees have listed. If you find a good one, share your solution in the comments.