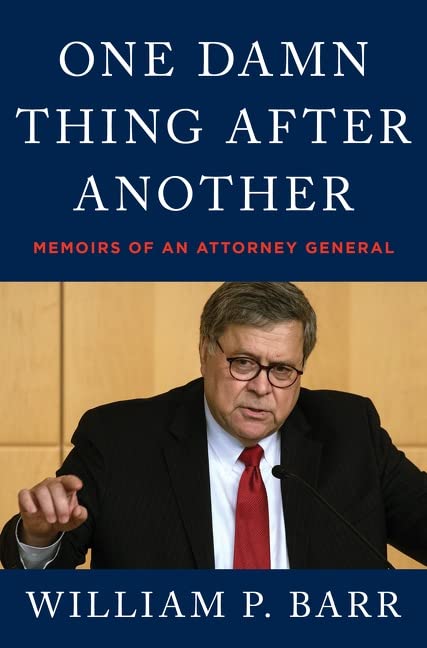 Readers of William P. Barr’s One Damn Thing After Another: Memoirs of an Attorney General, new from William Morrow, will recognize the author from the administration of President Donald Trump. Some readers may recall Barr’s stint as A.G. for President George H.W. Bush, a former head of the Central Intelligence Agency. Readers now learn that Barr also served in the CIA.

Recruited in the late 1960s, Barr worked for the agency while attending law school, and as a lawyer, worked for the CIA’s Office of Legislative Counsel. Aside from Stansfield Turner, “a disaster,” Barr is uncritical of CIA bosses, including John Brennan, a special case.

In 1976, John Brennan voted for the Stalinist Gus Hall, candidate of the Communist Party USA, a wholly-owned subsidiary of the Soviet Union. That disqualified Brennan from any post at the CIA, but by 2013 the Gus Hall voter was running the place.

During “Russiagate,” Brennan charged that Trump was in Putin’s pocket. As Barr’s longtime friend Robert Mueller confirmed, that wasn’t true. Barr is on good terms with key players who said it was.

“I had known [James] Comey for more than twenty years,” Barr reveals, and “helped him become U.S. Attorney in New York.” Barr also knew the DOJ’s Rod Rosenstein “for many years” and “believed him to be a consummate professional with a broad and deep understanding of the department’s business.” According to Barr, Deputy attorney general Rosenstein suddenly appointed Mueller special counsel to investigate Trump, a “controversial” move.

“Few can appreciate the complexities Rod faced during that tumultuous time,” writes Barr, “and even fewer will know the important contributions he made to the administration and the country.” The author leaves it there, so readers have to wonder.

Barr shows how the upper reaches of the FBI and DOJ mounted operations to take down a duly elected president. That is a serious crime but at no point did attorney general William Barr recommend prosecution, so Comey, Strzok, and others basically got off scot-free. When Barr appointed U.S. Attorney John Durham, he told him to stay away from Obama and Biden.

Like FBI, DOJ, and CIA bosses, previous presidents and vice presidents are also above the law. That’s quite the revelation, but Barr’s book is more interesting for what it conceals. Consider an episode from Barr’s first stint as A.G.

During the Ruby Ridge siege of 1992, FBI sniper Lon Horiuchi shot unarmed Vicki Weaver in the head as she held her infant daughter. Snipers are trained carefully to “acquire” the target, so the killing was not accidental. Barr spent two weeks organizing former attorney generals to defend Horiuchi, who already had government lawyers working on his behalf.

In his January 2019 Senate confirmation hearings, Democrats asked Barr if he had ever undertaken pro bono activities to serve the “disadvantaged.” As James Bovard observed, “nobody is asking about Barr’s legal crusade for blanket immunity for federal agents who killed American citizens.”

The FBI can mount massive military force against civilians and whatever the casualties, William Barr will side with the FBI. That’s pretty much all most Americans need to know about the author of One Damn Thing After Another.