The Costs of the Build Back Better Act

The Congressional Budget Office released its estimate of the costs of H.R. 5376, a.k.a. the “Build Back Better” Act. According to the CBO’s budget math, the much smaller spending bill that we talked about a few months ago doesn’t cost $0 as President Biden claimed it would. In fact, it doesn’t cost anywhere close to $0. Despite that, the U.S. House of Representatives voted to pass the spending bill. 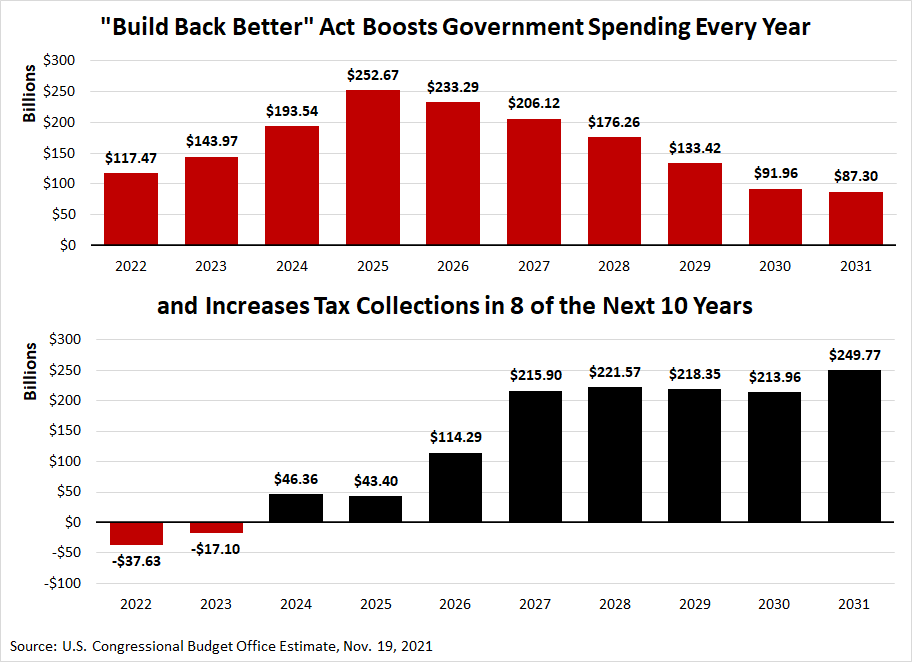 All the new spending adds up to $1.68 trillion from 2022 through 2031. All the increases in the federal government’s revenues add up to $1.27 trillion over the next decade. The CBO indicates the gap between the two is $367 billion. The chart below shows how the CBO thinks the Build Back Better Act will impact the national debt each year. Note the vertical scale on the chart changes from billions to trillions. 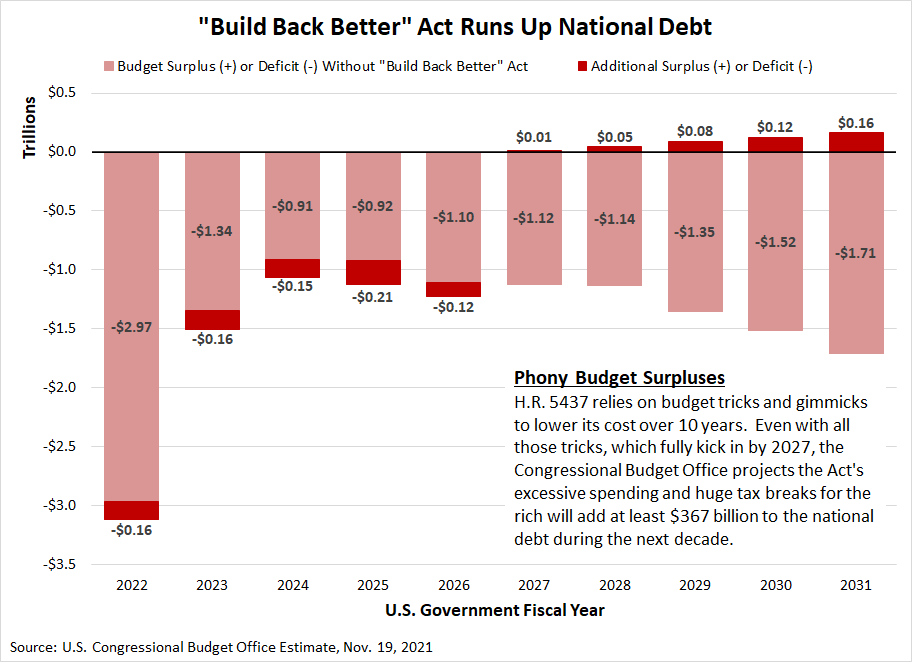 Writing at the Foundation for Economic Education, Brad Polumbo estimates its real cost to American households:

The true cost of the legislation, once one accounts for budget gimmicks and dishonest political rhetoric, is up to $4.9 trillion. That’s an astounding $32,000 per federal taxpayer.

And most of this money would go to wasteful government programs and counterproductive expansions of the welfare state.

For example, the bill funnels billions into electric vehicle subsidies that make almost zero difference on carbon emissions and pad the pockets of wealthy consumers. It similarly wastes billions funding a “Civilian Climate Corps” that would pay people to do environmental activism that even proponents admit won’t reduce emissions. It puts hundreds of billions toward subsidies for healthcare, childcare, and housing that will ultimately push the cost of these sectors even higher and prove counterproductive.

So, too, the Build Back Better agenda openly violates President Biden’s promises that he wouldn’t raise taxes on anyone earning less than $400,000. It raises billions in new taxes on nicotine products that millions of working-class Americans regularly consume and hikes corporate taxes that ultimately fall on workers’ shoulders via lower wages. It does all this while, rather hypocritically, giving the rich a net tax cut.

The Build Back Better spending bill is quite possibly one of the worst pieces of budgetary legislation in U.S. history. With 232 years of history to draw upon, that’s saying something.