Perhaps the most refreshing part of the movie Free Guy is the neutral role technology plays in the story. Technology isn’t a dark muse, luring an otherwise innocent into darkness. Perhaps this is why Free Guy seems admirably human despite the fact the entire story is framed within or around a video game.

The central antagonist, Antwan (Taika Watiti, Jo Jo Rabbit, Hunt for the Wilderpeople) is just a flawed human being. He’s a greedy, power hungry human who is clever at getting things he wants. In fact, he doesn’t even appear to understand let alone appreciate technology’s benefits.

The good guys, in contrast, want to harness technology to serve the interests of their customers (or users). They are upset because they made poor decisions and weren’t clever enough to see their competitor for who he was.

Thus, the story (and story within a story) of Free Guy is more textured with human ambition, weakness, courage, and redemption. And it’s entertaining.

Free Guy’s premise is both clever and interesting. Two smart, ambitious game designers come up with an Artificial Intelligence (AI) gaming platform that allows characters within the games to grow and evolve. They sell their technology to Antwan, a video game mogul, with ambitions to conquer the (gaming) world. Antwan’s tech firm Soonami dominates the video market with a massive multiplayer online video game called Free City. 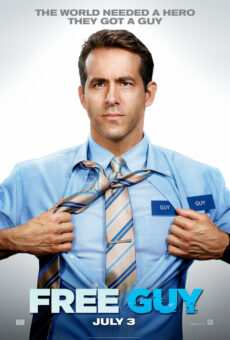 Antwan buys and locks away the AI technology to avoid paying royalties to its creators, Keys (Joe Keery, Stranger Things, Molly’s Game) and Millie (Jodie Comer, Killing Eve). Keys is racked by guilt and self-loathing for allowing his brainchild to be banished to Soonami’s unused servers. Meanwhile, he watches as Antwan builds his first person shooter game into a global phenomenon.

But Millie figures out that Antwan has breached their contract. She suspects he has illegally incorporated their technology into the game. Antwan is not just locking them out of the industry – he is profiting off their intellectual property (IP). She is on a mission to expose him and covertly enters the game to find the proof.

Meanwhile, Guy (Ryan Reynolds, Deadpool films, The Hitman’s Bodyguard), a “non-player character” in the Free City game, begins to evolve. He is no longer satisfied with a life that involves inane repetition as different real world players run through brutal robber scenarios at his bank. As he becomes increasingly aware of the limits of his life inside the game, he stumbles across and becomes obsessed with Molotov Girl. Unbeknownst to Guy, Molotov Girl is Millie’s avatar.

Free Guy begins as parallel stories in two worlds – one “real” and the other designed. But as Guy acquires more self awareness, and feelings, the world inside and outside the game cleverly converges. This creates tension and confusion. Millie and Keys begin to wrestle with larger issues about life and the consequences of AI. What happens when a character develops aspirations and awareness beyond the original source code?

The question is never answered, but the actions of Keys, Millie, Guy, and ultimately Antwan provide different variations of an answer. None of their answers resolve the basic question.

But Free Guy is much more than a question of the AI ethics. It also highlights how entrepreneurial aspirations differ.

The central story becomes an epic struggle between the violence and narcissism of games like Grand Theft Auto and more benign but equally challenging simulated reality games such as The Sims or SimCity. While the story clearly favors the Sims-like idealism creed by Millie and Keys, Free Guy falls just short of blind acceptance of the naive world of Guy and his friends.

Overall, Free Guy is a clever, ultimately light hearted take on heavier issues that continue to define the technology sector. Technology, however, is kept in its place; it never overshadows the human foibles that make a good story. Thus, Free Guy remains entertaining, has enough action to keep the forward momentum going, and leaves enough unresolved space to keep audiences interested.