Literally on 9/11/01 and throughout the 20 culture-destroying years since, the Independent Institute has stood hard and fast for the difficult but essential principles that undergird liberty, human dignity, and the rule of law.

While many whom we had thought shared our devotion to liberty were doing things like removing the word “Peace” from their mastheads and calling for “sand to be turned into silicon,” (that is, nuking the desert countries), we were among the precious few responsible voices calling for responses in accordance with peaceful, prosperous and free societies, grounded in a commitment to human worth and dignity.

Here’s a recap of some of those efforts:

In the spring of 2002, we organized the first, major, national event to challenge the “War on Terror,” with a sold-out audience of over 1,000 (we even had scalpers!), held in San Francisco’s Herbst Theater:

In conjunction with the event, the San Francisco Chronicle ran an op-ed adapted from Gore Vidal’s then new book, Perpetual War for Perpetual Peace: The New War on Freedom : Give me liberty, or give me . . . what? Security?

Before and subsequent to this, we organized an ongoing series of events, many covered by C-SPAN:

Why Freedom Matters More Than Ever, with David R. Henderson

Big Brother is Watching, with James Bamford, Author of Body of Secrets: Anatomy of the Ultra-Secret National Security Agency

Secrecy, Freedom and Empire: Lessons for Today from Vietnam and the Pentagon Papers, with Daniel Ellsberg and a panel of discussants, held at the University of California, Berkeley

Terrorism and Iraq: What is the Nature of the Relationship? A Debate, with Don Smith, Stephen Hayes, Walter Russell Mead, and Ivan Eland

Against Leviathan: Government Power and a Free Society, with Robert Higgs

The Empire Has No Clothes: U.S. Foreign Policy Exposed, with Ivan Eland

In 2005, we held a 2-day conference at the Willard Hotel in Washington, The War on Terror: Implications for Domestic Security and Civil Liberties, with Ron Paul as the keynote speaker.

In 2006, we opened an office in DuPont Circle in Washington, DC, with Independent fellows Ivan Eland, Alvaro Vargas Llosa, and Gabriel Gasave moving there. The building was a former mansion with a ballroom very well suited to holding frequent events and we pursued a series of bi-coastal events both there and in the Bay Area:

How to Really Win the War on Terrorism, with Charles V. Peña, Roger W. Cressey, and Joseph Cirincione

The Reality and Legacy of the Iraq War, with Ivan Eland and Mark Danner

A series of events on our book, Twilight War: The Folly of U.S. Space Dominance, by Mike M. Moore (former Editor, Bulletin of the Atomic Scientists).

Why Are Politicians Always Trying to Scare Us?, with Robert Higgs

Can the U.S. Withdraw from Afghanistan and Iraq?, with Ivan Eland, Peter Galbraith, and Charles V. Peña

Civil Liberties and Security in an Age of Terrorism, with Robert Higgs, Anthony Gregory, and Mary L. G. Theroux

Liberty Defined: The Future of Freedom, with Ron Paul

Whither America: A Foreign Policy Debate Among Realists, Nationalists and Internationalists, with Ivan Eland, Michael Lind, and Harry Nau

Which brings us to 9/11’s spawn: the “Coronacrisis” and our many virtual events over the past 18 months, starting 3 days following the declared “3-week” shutdown:

How to Restore Freedom to Americans in This Time of Pandemic?, with Graham H. Walker and Randall G. Holcombe

In addition, Independent produced numerous books, policy reports, and many articles in The Independent Review and online.

Against Leviathan: Government Power and a Free Society, by Robert Higgs

The Empire Has No Clothes: U.S. Foreign Policy Exposed, by Ivan Eland

Resurgence of the Warfare State: The Crisis Since 9/11, by Robert Higgs

Neither Liberty nor Safety: Fear, Ideology, and the Growth of Government, by Robert Higgs

Partitioning for Peace: An Exit Strategy for Iraq, by Ivan Eland

Depression, War, and Cold War: Challenging the Myths of Conflict and Prosperity, by Robert Higgs

The Civilian and the Military: A History of the American Antimilitarist Tradition, by Arthur A. Ekirch, Jr., with a foreword by Ralph Raico

No War for Oil: U.S. Dependency and the Middle East, by Ivan Eland

Delusions of Power: New Explorations of the State, War, and Economy, by Robert Higgs

Crisis and Leviathan: Critical Episodes in the Growth of American Government (25th Anniversary Edition), by and with a new preface by Robert Higgs

War and the Rogue Presidency: Restoring the Republic after Congressional Failure, by Ivan Eland

Liberty in Peril: Democracy and Power in American History, by Randall G. Holcombe, with a foreword by Barry R. Weingast

And of course our the symposium in the current issue (Fall 2021): 20 Years of the “War on Terror”

And for a little light relief: Episode 5 of Love Gov: From First Date to Mandate; and as a running theme in Love Gov2: A Crisis Not to Waste.

For those of us who thought we “knew” the “facts” behind 9/11 and subsequent events, I commend to you the recent article by Senior Fellow Angelo M. Codevilla, “Graveyard of Narratives: Afghanistan, et al., for the record,” for an insider’s exposé of the false narratives behind the “War on Terror.”

The real legacy has been the deterioration of American’s traditional attitudes in support of liberty and checks on government power. The following surveys, taken just before and after 9/11, capture some of these dramatic changes at the time: 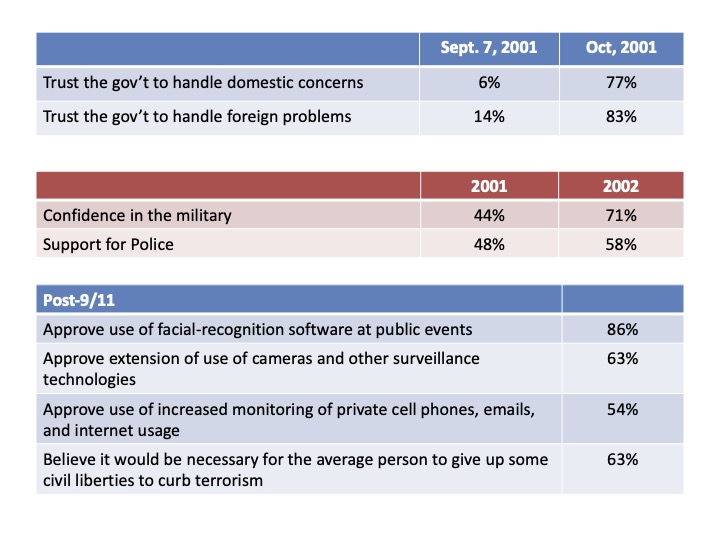 All has now led to today, and the attempt to mold a new generation to fear and hate “others;” reject Truth, Goodness, Science, and Beauty; and be submissive citizens to an almighty, paternalistic State.

There is nothing that would have made me happier than us not having been right. And of course, the ground had been prepared well in advance, with many decades of pervasive U.S. policies of global interventionism and coercive “nation building,” creating a huge, domestic military-industrial-congressional complex of massive waste and corporate welfare. Internationally, such measures were propping up corrupt and brutal regimes, provoking deep resentments, and helping to foster dangerous, anti-Western, terrorist movements. With 9/11, instead of holding accountable those specific individuals responsible for the massive deaths and destruction in New York and Virginia, the Washington establishment tripled and quadrupled down by launching even more interventionism and nation building but to a far greater extent.

Tragically, everything we warned about above has since come to pass: massive numbers of deaths and maimings, trillions of dollars misspent, runaway government spending and debt, extensive political and special-interest pork and corruption, negation of constitutional rights, including the loss of any expectation of privacy, and much more. This list is too long and too painful to enumerate.

The good news is that today, most people are increasingly coming to learn the hard lessons of this sorry misadventure and folly of the “War on Terror.”

The bad news is that virtually none of the measures that could be undone have yet been and are unlikely to be without our discrediting the scam involved. Leviathan and its beneficiaries love the new powers and they will not give up on their own.

Who is with us?