The Congressional Budget Office has updated its earlier budget and economic outlook for the next 10 years. There is one big takeaway from their revised outlook. The Biden-Harris administration’s planned spending is on an unsustainable path.

The following chart from the CBO’s report shows what that means in terms of expected spending and tax collections: 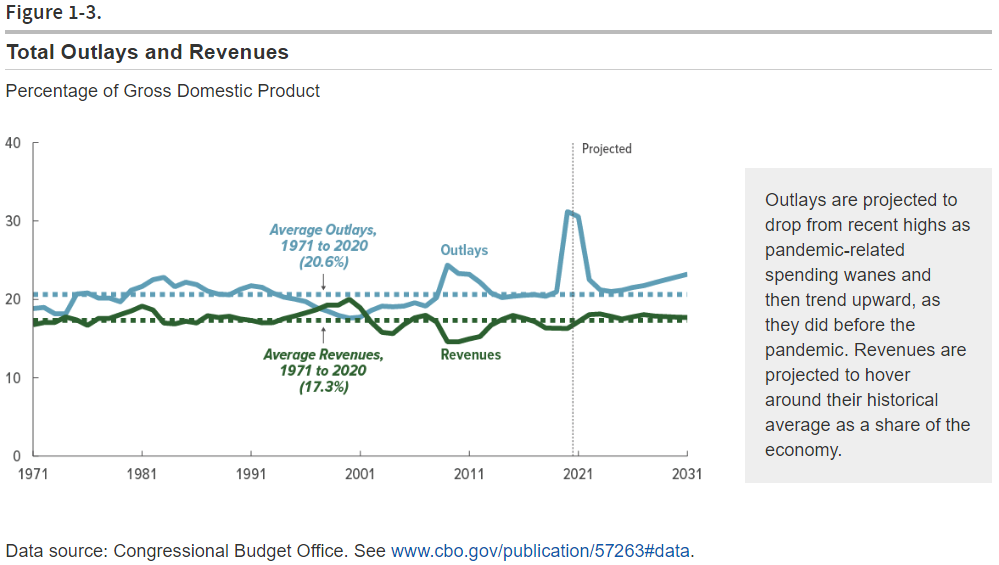 Assuming pandemic-related spending ends as the CBO projects, the Biden administration’s planned future spending is what sets the nation’s fiscal future onto an unsustainable path. Here’s what that increased spending means for the U.S. government’s future budget deficits:

The big change in deficit projections is for the 2021 fiscal year. The American Rescue Plan Act of 2021 adds $700 billion to the year’s deficit, boosting it to $3 trillion. Over the next 10 years, the CBO forecasts deficits will total $12.1 trillion. Budget tricks and technical adjustments reduce this figure by $200 billion from the CBO’s February outlook.

That longer-term picture is misleading because the Biden-Harris administration isn’t done adding to future spending. For example, the CBO hasn’t yet added in any proposed infrastructure spending in its projections, because it hasn’t yet passed into law. The CBO also won’t account for the budget tricks being used to conceal the true size of that new spending.

None of which will do anything to improve the U.S. government’s fiscal sustainability.