President Joe Biden wants to increase government spending by a lot, but will that spending grow the economy by a lot?

A surprising source says it won’t. None other than President Joe Biden himself makes that claim in the economic assumptions of his budget proposal for Fiscal Year 2022.

Here’s the economic growth President Biden expects to buy with all the new spending loaded into his first budget proposal: 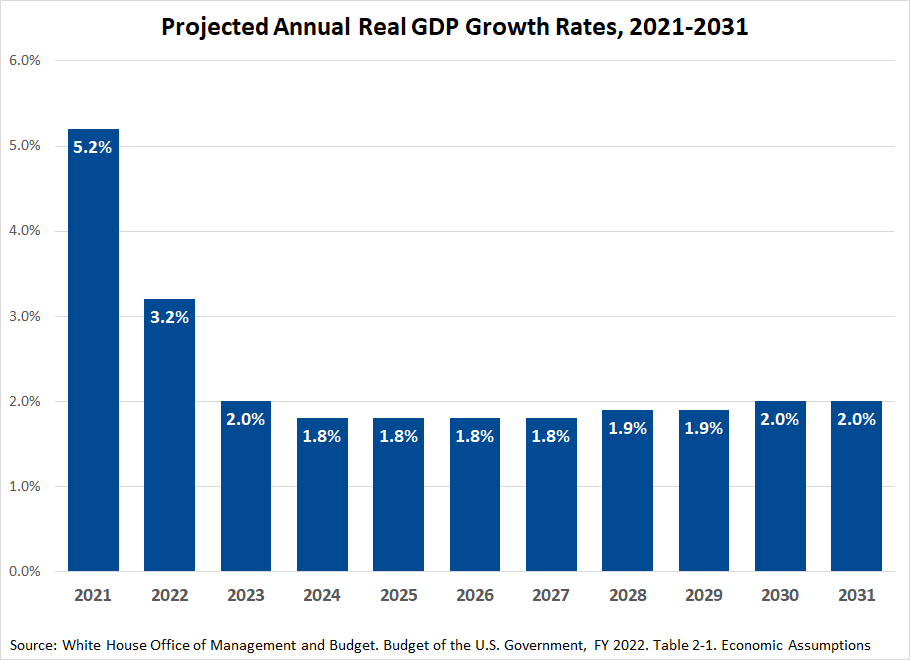 The high economic growth projected for 2021 and 2022 is primarily the result of ending pandemic lockdowns. Simply lifting the jackboot of these government mandates from the necks of businesses and individuals will do wonders for growing the economy.

After such a healthy start, President Biden believes his heightened spending will not boost the economy into heightened growth. He projects two percent real economic growth or less in every year from 2023 through the rest of the next decade.

Brad Polombo explains the meaning of President Biden’s budgetary admission, drawing on a recent editorial in the Wall Street Journal:

The progressive argument in favor of government spending is supposed to be that it will help stimulate economic growth. But the White House’s own projections essentially concede that their big-spending plans won’t lead to high growth over the long run.

As reported by the Journal, Biden’s budget projects that growth will surge to 5.2 percent in 2021 and 4.3 percent in 2022. Those numbers are strong. But then, by the White House’s own admission, growth will fall to 2.2 percent in 2023 and slump to around 1.9 percent for the rest of the decade. These levels are bleak, not the roaring revival Biden has promised.

“The White House is essentially conceding that all of its unprecedented monetary and fiscal stimulus really is living for today with little regard for the future,” the Journal’s editorial board writes. “It implicitly concedes that the growth it spurs now will have to be paid back later in the form of higher taxes or tighter monetary policy, which might reduce growth. This is the definition of a ‘sugar high.’”