Who Is Paying for President Biden’s Spending?

When President Joe Biden was sworn into office on January 20, 2021, the U.S. government’s total public debt outstanding stood at $20,751.9 billion. The chart below shows who Uncle Sam borrowed all that money from on that date: 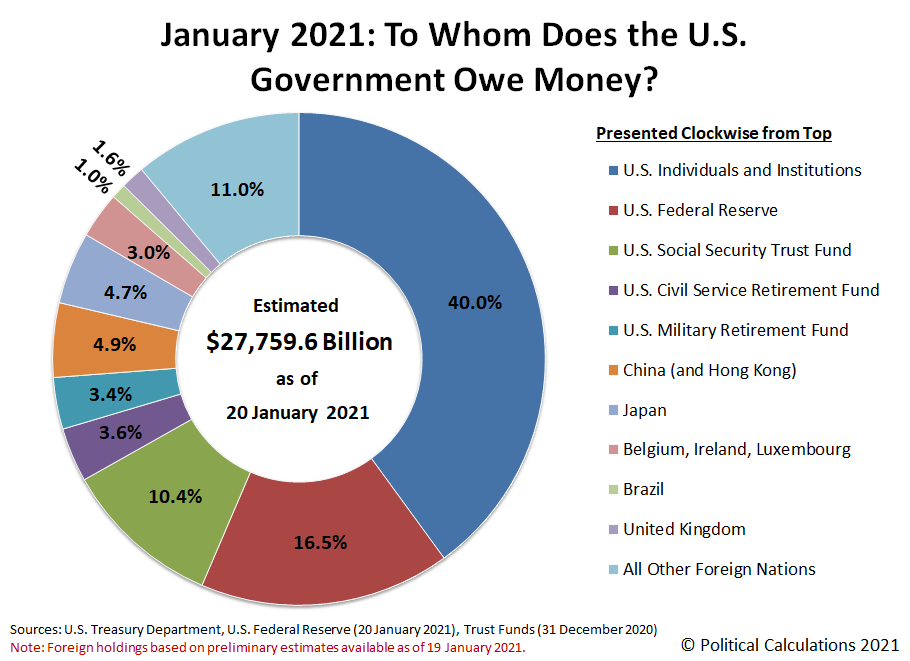 Since being sworn in, he has:

It’s no surprise that much of this new spending is being funded by borrowing. Through Wednesday, April 7, 2021, the U.S. government’s total public debt outstanding has risen by $329.6 billion to $28,081.5 billion. That’s an average of $4.28 billion of new borrowing per day.

What really stands out however is that the U.S. government has borrowed nearly all that money from the Federal Reserve. In the 77 days from January 20 through April 7, 2021, the Fed’s balance sheet increased by $215.5 billion worth of U.S. government-issued treasuries, which accounts for 65% of the increase in the government’s total public debt outstanding by itself.

The Fed’s percentage share of the net increase in the national debt rises to 91% when you add in its acquisition of $84.8 billion worth of mortgage-backed securities issued by U.S. government-supported enterprises backed by the U.S. Treasury.

That dominating share says a lot about how President Biden intends to fund all his new spending.

What could possibly go wrong for ordinary Americans?