I was about a third of the way through Choe Zhao’s (The Rider, Songs My Brothers Taught Me) meditative movie Nomadland when I began to fully realize its brilliance. This is a “small” film (budget: $5 million) but carries the heart, production values, and the quality of a drama with a much bigger production budget. It also carries a universal message of respecting the dignity of all humans and the voluntary choices they make, no matter how far outside the mainstream they may be.

Houseless But Not Homeless

Nomadland, inspired by a nonfiction book of the same name by Jessica Bruder, tracks the wanderings of Fern (Frances McDormand, Fargo, Three Billboards Outside Ebbing, Missouri). Fern is an older woman, likely in her late 50s or early 60s, but her age is not specified. She is coping with her husband’s death and the loss of her job. The mining company that employed the town closed up shop. The town is literally erased from the map. 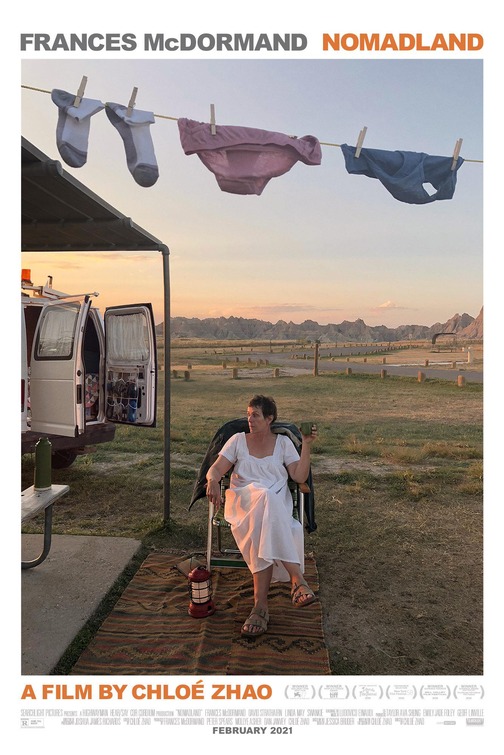 Lacking direction and focus, Fern sells her possessions and lives out of her van. She picks up odd jobs throughout the West to earn cash and pay her meager expenses.

Zhao wrote the screenplay, directed, and edited the film, an incredibly difficult set of tasks for a feature film. Perhaps because of her willingness to take on these roles, Nomadland contains an aesthetic and vision that is coherent, penetrating, and masterful in its ability to provide insight into this subculture. At one point, a young acquaintance asks Fern if she is homeless. She responds that she is “houseless” but not homeless. Over the course of the movie’s 108 minutes, we discover the full meaning of that profound insight.

The film is notable for its seamless integration of real-life people – non-actors – who willingly choose the life of a nomad. Their heartful and vulnerable conversations, combined with McDormand’s reactions, bring a poignance and meaning to the film that could not likely be replicated with professional actors working directly from a script. Indeed, the real-life nomads bring authenticity to Fern’s wanderings that is powerful and compelling. The professional acting, while high quality, is subtly but noticeably different.

Nomad Life is a Choice

Most nomads make do with enough cash to live out of their vans and modest RVs. For the nomads, their lifestyle is a choice. The inability of mainstream society to understand this choice is a recurrent theme throughout the movie. Indeed, family and friends pressure Fern to give up her lifestyle, even offering her free lodging and support at various times. Fern resists, finding the road and her nomad community more supportive and accepting. The conventional lifestyle, centered around steady jobs, home (and land) ownership, is constraining and limiting.

While the movie does not hide the sense of loss or personal trauma that lead many into the nomad life, Zhao’s nuanced storytelling ensures they retain their dignity. The nomads are choosing their destiny, not letting others script it for them.

Throughout Nomadland, I was reminded of what a world bank economist told me as she was introducing me to urban slums in Mumbai, India. The slum dwellers, she said, are quality of life poor, not cash poor. Among the nomads, the denizens of Nomandland are cash poor but they are not quality of life poor. They express their humanity in how they live their lives, not what they acquire.

Chloe Zhao’s movie is a masterful achievement. Her storytelling uses the full cinematic range of filmmaking to unveil the human dignity inherent in making these unconventional choices.

Nomadland has received numerous nominations for awards a the 2021 Academy Awards, including Actress in a Leading Role (Frances McDormand), Directing (Chloe Zhao), Film Editing (Chloe Zhao), Best Picture, and Writing – Adapted Screenplay (Chloe Zhao). The film may take them all.