I had mixed feelings when I queued up the action movie Run Hide Fight on the Daily Wire. I knew this narrative film about a high school mass shooting, if done well, was likely to hit a raw nerve.

After all, I am a martial-arts trained self-defense coach, a faculty member at a public university whose office sits just a few hundred feet from the site of a deadly school shooting, and mentor to students who have lost friends in other mass shootings (including the Parkland high school and the Tallahassee Hot Yoga shooting). School shootings and their trauma are not fantasy.

The movie, as expected, hit a raw nerve. But the story is well-crafted, and the content is tailored to contribute to an important contemporary social issue. It’s grounded in certain uncomfortable realities that should be in the forefront of current discussions on school violence and how to respond to active shooters. In short, Run Hide Fight hits notes sorely missing in public discourse on school violence.

The Uncomfortable Reality of School Shootings in the U.S.

Crafting a successful narrative film from such controversial content is challenging at best. For many students, and almost all parents, each real-life shooting becomes seared into our consciousness as a terrifying potential reality.

While school shootings have occurred for decades, national awareness and widespread concern coalesced around the Columbine High School massacre in 1999. Two high schoolers in Colorado planned and implemented a systematic attack that killed twelve students, a teacher, and injured 21 before the two perpetrators committed suicide. The helplessness and brutality of the murders shocked the nation.

Since then, large scale shootings on school campuses, including colleges and universities, have made headlines with disquieting regularity. Most school shootings are small and contained, involving one shooter and a handful of victims.

But after about 2005, the number of school shootings and their scale ticked up significantly. Over the past 15 years, school shootings averaged about 17 per year according to data compiled on Wikipedia. Fifty-five school shootings happened in 2019 alone. Three quarters of these shootings occurred on a high school, middle school, or elementary school campus.

The potential for mass casualty shootings are now a considered part of school policy. In Florida, a school “guardian” program allows trained non-law enforcement teachers and staff to carry guns for defensive purposes. More and more school districts (and colleges) are instituting active shooter training. Given their rising prevalence, the unwillingness of narrative filmmakers to grapple with these events could be considered a sign of cultural neglect or denial.

Writer-director Kyle Rankin along with producers Amanda Presmyk and Dallas Sonnier deserve credit for taking this issue seriously within a narrative film’s story structure. Moreover, they have done a credible job of addressing the issue forthrightly even though, as a narrative film, it indulges in creative embellishments to increase the drama and raise the stakes of the conflict.

Most importantly, Run Hide Fight works as a movie. On many levels. The story itself focuses on an estranged teenager, Zoe Hull (Isabel May, Alexa & Katie Netflix series). Zoe is a senior in high school, struggling to accept the recent death of her mother (Radha Mitchell, Melinda and Melinda, Finding Neverland, The Crazies). She is angry, pushing people away, and has become distant from her concerned father (Thomas Jane, The Punisher, 1922, The Predator).

Zoe and her best friend, Lewis (Olly Sholatan), arrive at their high school on senior prank day. They make it halfway through the school day before the cafeteria is invaded by suspended student Tristan (Eli Brown) and three cohorts determined to make names for themselves to the outside world. They implement a well-organized and thought-out plan, which includes the murder of fellow students, staff, and teachers.

As adults attempt to stop the violence, they run afoul of the cruel reality that Tristan doesn’t have real goals or objectives other than avenging perceived slights and the indifference he experienced from teachers, staff, and students. This nihilistic worldview is also critical to the plot and forward momentum of the story. (It’s also reflective of real-world teenage shooters.)

Zoe, meanwhile, finds herself desperately trying to save her own life as her friends are shot. As she flees, however, she is confronted with a horrifying moral dilemma: She can do what her instincts tell her for self preservation, or she can confront her fear and muster the courage to help her fellow students escape near certain death. 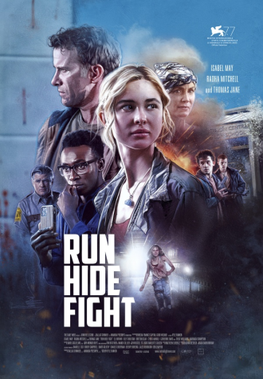 The story is well-crafted, playing off weaknesses in school protocols during active-shooter scenarios, the inevitable ignorance of law enforcement trying to assess the seriousness of a threat (on senior prank day, no less), naive responses from adults who are woefully unprepared for the reality their protocols are designed to address, and the disturbing ways social media plays into the narcissism of the perpetrators.

Isabel May provides a compelling performance as Zoe. She effectively conveys the sheer terror someone faces when literally staring down the barrel of a gun and then being hunted down by killers. When faced with life threatening events, humans run, fight, or freeze. Zoe goes through each of these stages in a moving and engaging performance.

As a parent, this movie is not easy to watch. If someone has experienced this scenario first hand, they should probably avoid the movie altogether.

But Zoe’s character arc is important for more than creating the foundation for a good action film. It hints at the disturbing realities behind effective responses to active shooters.

Active shooter training has evolved as experts have examined the deadly details of each event. The movie’s title is an explicit reference to current thinking about effective responses to active shooters based on this research and analysis. In addition, the filmmakers have done their homework. Their story includes elements of real-life school shooting scenarios which are easily identifiable to those who follow these events.

School shootings, particularly on the scale of Columbine or Parkland, are planned. Shooters don’t broadcast their intentions or timelines. The result is that people physically near the shooter are most likely to die. (This brutal reality is shown viscerally in the film.) It’s those lucky enough to avoid being the initial targets who are likely to survive.

But survival also most likely means they will have to fight. Run Hide Fight gets this right on a broad level if not the details of the character’s actions.

While running is the most effective way to get to safety, hiding is a second best strategy. But this choice creates its own risks, another element of the action that Rankin gets right. Active shooters are just that, active. They hunt down targets. Ultimately, when someone has been found, or no escape is possible, survival depends on fighting back against the attackers.

The nature of this “fighting” can take on many forms. While Zoe eventually does obtain a firearm, most of her work saving the innocent comes through her own courage and willingness to put her own life at risk through cleverness, individual actions, and decisions. To Rankin’s credit, and relevance, the story never depends on Zoe becoming Rambo or John Callahan (Die Hard). Rather, she is an ordinary kid who is able to overcome her own terror and gather the courage to do the right thing at tremendous risk to her own life.

The violence, and Zoe’s actions, are scaled to a remarkably realistic level, despite its dramatic embellishments. Some movie critics have dismissed Run Hide Fight as “Die Hard for high school.” This is a mischaracterization and shows a failure to seriously consider both the craft embedded in the movie, the intelligence with which the filmmakers have approached a controversial and relevant social issue, and the core message underlying the story.