According to Wikipedia, the film Promising Young Woman (2020) “follows a woman who takes revenge against men who have wronged her.” This isn’t accurate. The movie is actually darker, and much better, than this description.

Fair warning: I have written a book on campus sexual assault, so this movie review dives deep into the substance behind the story of Promising Young Woman.

Promising Young Woman is a cohesive, well-directed, and generally well-told story about the trauma of sexual assault on those at the periphery of the crime. Indeed, the consequences of sexual assault are devastating. The movie boasts an outstanding performance by Carey Mulligan (Pride and Prejudice, Drive) in the lead role. Mulligan’s performance brings disturbing life to a rarely discussed aspect of sexual assault. At the same time, the screenplay and dialogue forthrightly challenge audiences to think more broadly about the trauma it creates. 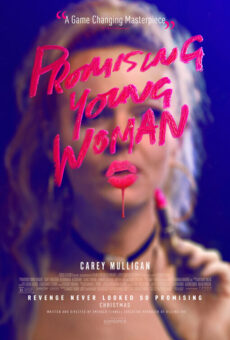 The movie, written and directed by Emerald Fennell in her first feature film, fits firmly within the genre of revenge thrillers. Cassie Thomas (Mulligan) was a bright medical student but now works at a coffee shop. She drops out of school to provide emotional support to her best friend Nina after she is raped by fellow medical students while drunk at a party. No one believes Nina’s story of rape. Nina’s depression eventually leads to suicide, traumatizing Cassie.

Cassie dedicates her life to confronting lecherous men – all of whom proclaim they are “good people” – who take advantage of inebriated and incapacitated women. Her revenge acts, however, do little to lessen her own trauma. She continues to languish, emotionally and professionally. Meanwhile, the culprits in Nina’s rape move on with their professional lives without consequence.

Cassie’s worldview begins to shift when she runs into Ryan (Bo Burnham, Eighth Grade), an old friend from med school who is now a pediatric surgeon. She begins to confront her own demons, which are driven by her guilt for not doing enough to help Nina. Mulligan’s gripping performance keeps audiences guessing about how far Cassie will go to seek revenge. Fennell’s plot includes many twists and turns before Cassie’s story plays out.

Plot and Themes May Come Across as Heavy-Handed

Fennell’s direction and story disturbingly provoke audiences to question how they balance perceptions of personal responsibility, obligations to protect those who are vulnerable, and the ways culture and institutions address rape.

Unfortunately, the movie’s themes and plot may seem politicized and heavy-handed in today’s environment. On the surface, the script appears to be a not-so-subtle commentary on the Brett Kavanaugh Supreme Court nomination hearings. Yet, the film’s concept and story were developed and sold in 2017, a year before the hearings.

The dialogue, on the other hand, carries striking similarities to the sexual assault case lodged against Kavanaugh. This is unfortunate. The Kavanaugh case is problematic on a number of different levels. No reliable corroborating evidence or testimony for Kavanaugh’s accuser was found.

Nevertheless, sexual assault is far more prevalent than many in the general public believe. More importantly, Nina’s story, even if stylized for a feature film, is far more relevant to the characteristics of most sexual assaults, particularly college students. Thus, Promising Young Woman has the potential to elevate the discussion by brokering a broader discussion of consent and how the lack of consent exacerbates the psychological harm from sexual assault.

Unfortunately, Promising Young Woman doesn’t seriously engage this broader discussion or the manner in which the public discussion on sexual assault has shifted. For example, the film never seriously grapples with the issue of due process. Actual sexual assault cases are for the most part evaluated based on evidence from the accuser and the accused. While Nina’s case is dismissed as “he said, she said” in one scene, this is more a convenient plot point than a serious critique of the process.

Moreover, the characterization of sexual assault investigations is simplistic. The medical school dean, like the perpetrators of the rape, seems to authentically struggle to remember Nina. But the nature of Nina’s accusations, and who they were leveled against, makes the dean’s lapse highly unlikely. Those who investigate sexual assault accusations remember the names of the victims. Adults, including medical students, would remember the name of the person that accused them of rape, particularly if the victim was a classmate. Med schools are not that big. While the circumstances serve the plot of the film and Cassie’s character arc, they lessen the story’s relevance.

Importantly, the trauma of sexual assault often does interfere with the ability of victims to recall details and sometimes the circumstances surrounding the assault as well as specifics about their perpetrators.

Medical Students Are Not “Just Kids”

More plausibly, the former students, now men with successful medical practices, excuse themselves by claiming they were “just kids.” Their behavior implies that they should be exempt from any repercussions from the crime and trauma they inflicted. This reaction is not uncommon—for teenagers and undergraduate college students. (Notably, the principal accusation against Kavanaugh occurred when he was 17 years old and the accuser was just 15.)

But, as a practical matter, medical students are not “kids” (any more than most graduate students are). They are adults, and they are treated as professionals. Yet, while Cassie dismisses their casual excuses, at no point does she confront Nina’s rapists with their rationalizations.

This tension could have been a salient plot point. Medical students would know that the brain’s cerebral cortex, the part that accounts for critical thinking, is fully or near fully developed by their mid-twenties. (An excellent, accessible resource on the neuroscience behind brain development is The Teenage Brain by Frances E. Jensen.)

Paradoxically, the focus on Cassie’s journey through trauma, healing, and re-traumatization has an unexpected side effect: diminishing Nina’s trauma and the direct effects of rape. Cassie’s behavior comes across as a self-imposed penance for her feelings of helplessness and guilt in the wake Nina’s suicide. As a result, it undermines the dramatic effect of very real trauma and a very serious problem. While this fits the revenge thriller nature of the story, Nina’s own trauma could have provided further motivation for Cassie’s actions.

Despite these substantive criticisms, Promising Young Woman is a solid piece of revenge suspense. Fennel’s screenplay does a good job of keeping audiences guessing, and the twists keep coming. Mulligan is exceptional, turning in a major award-qualifying performance. Under Fennell’s able direction, Mulligan convincingly shifts moods, tone, and attitude. We never really know if Cassie is deeply depressed, brazenly rational, or psychotic.

A short primer on sexual assault, emotional trauma, and potential solutions can be found in Unsafe On Any Campus? College Sexual Assault and What We Can Do About It.

Video clips (under 10 min) from a public forum with experts on campus sexual assault provide context on:

The extent of the problem:

The role of alcohol and drugs in facilitating campus sexual assault: