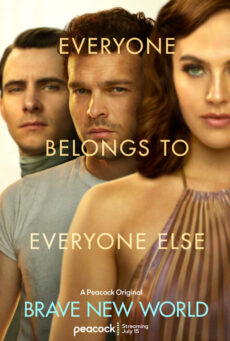 Yet another cinematic remake of Aldous Huxley’s Brave New World made its debut this year, this time as a nine-part series on NBC’s streaming service Peacock (watch the trailer here). Fans of the novel are likely to be disappointed. However, those looking for a contemporary aesthetic and interpretation may find David Weiner’s spin refreshing and probing. For those looking for an adaptation that puts individualism and personal liberty at the center of the story, they’ll be hard pressed to find much better television.

Weiner’s interpretation of the classic is slick, stylish, and well acted. Unfortunately, it lacks the layers and depth of the classic dystopian novel. Thus, perhaps not surprisingly, the first season comes off as overly reductionist and thematically underdeveloped. Nevertheless, the bones of the plot and characters remain firmly rooted in Huxley’s vision for a dystopian World State governing London several centuries into the future. Fortunately, and perhaps most relevantly, producer Wiener and his cadre of writers have done an admirable job trying to stay faithful to what is perhaps the novel’s most important and timely theme: individual identity, agency, and personal freedom.

The Dystopian Quest for Social Stability

For those needing a refresher, Huxley’s Brave New World effectively extinguished individuality. Everyone is kept in their place through brainwashing, hypnotism, and a drug called “soma.” World Controllers enforce a brutalist system of stamping out individual emotions, character, and decisions to rid the human race of the individualism that led to its near extinction.

The new world is organized into strict hierarchies through careful breeding, ruthless application of operant conditioning through corporal punishment, brainwashing, and chemically induced bliss delivered by the drug soma. Social Castes range from the highest in intelligence (Alphas) to the lowest (Epsilons). Children are created via assembly lines—also social commentary on industrial capitalism in the novel—and raised en mass through carefully controlled education and behavior modification programs. Everyone has their proscribed role and is engineered to like it. The goal of this “Brave New World” is to create a stable society with little or no desire to aspire to any activity or emotion outside anyone’s caste.

In the book as well as the TV series, individuals are controlled by channeling instinct and emotion through carefully constructed social activity. Romantic personal connection—monogamy—is prohibited, and social engineers keep human emotion in check by encouraging promiscuous and purely physical (if banal) sex. Promiscuous sex is encouraged with as many partners as possible to prevent individuals from forming personal bonds. Those who feel attracted to one person are shunned or sent to reeducation.

This theme is critical to Wiener’s version of Brave New World. The entire season is an extended aesthetic and philosophical exploration of individual versus collective identity within the context of physical intimacy.

A Contemporary Spin on Plot and Characters

In a significant break from the plot of the original novel, society as well as doses of soma are managed by an artificial intelligence named Indra. A special type of contact lens connects everyone to the Indra network, allowing Indra and the World Controllers to monitor every act and decision. Removing the contact lens is a signal that someone is off grid and triggers intervention by the Controllers.

Society works smoothly until the “savage” John (Alden Ehrenreich, Solo: A Star Wars Story, Hail Caesar!) is introduced into New London, disrupting the World State. John grew up in what is essentially a theme park that projects a caricatured image of the American West (which also serves as commentary on history). Its unruly habitat projects a barbarism ruled by unrestrained emotion and individualism, much to the horror of visitors from New London. While the recasting of Savage Land may raise the hackles of Huxley loyalists, and lacks the dimension given in the novel, the story line is more contemporary. (It also works better if a second season comes out.)

Wiener’s adaptation retains the novel’s major characters. Bernard Marx (Harry Lloyd, Game of Thrones, Doctor Who, The Theory of Everything) is an Alpha whose narcissistic need to feel important pushes him to make decisions that conflict with his role as an Alpha and eventually take advantage of those in lower casts. Jessica Brown Findlay (Harlots, The Guernsey Literary and Potato Peel Pie Society, England is Mine) plays Lenina Crowne, a Beta, who is the object of Marx’s sexual attention but ends up connecting with John the Savage. World Controller Mustafa Mond, now cast as a woman (Nina Sosanya) plays a critical role in the first season as well although Mond’s arc is transformed by the plot of the series. Demi Moore makes a brief appearance as John’s mother Linda. In a plot deviation critical to the series, Wiener adds a new character, Wilhelmina “Helm” Watson (Hannah John-Kamen, Game of Thrones, Ready Player One, Anti-Man and the Wasp). An extreme empath, Helm is close to Marx. Her job is one of the most important in the World State: she designs “Feelies”—orgies that sap the emotion and energy out of the highly sexualized population.

Wiener has clearly made this adaptation of Brave New World his own (unlike others such as the 1980 television film adaptation). Creatively, he has chosen the first season to explore the focus of individual versus collective identity, what identity means for personal freedom and liberty, and how these themes are expressed through the intimacy of sex. For the most part, Wiener’s adaptation works.

What the future holds for the series is uncertain. Under any circumstances, tackling Huxley’s immensely dense and layered tome would challenge the best filmmakers. Creatively, the highly structured medium of cinema forces them to choose among many varied themes and subtexts. Whether this choice fully pays off for the creators and viewers will depend in part on whether future seasons get a green light.