Created Equal: Clarence Thomas in His Own Words is now streaming on PBS. It’s appearance on PBS is a important testimonial to the hard work and objectivity brought by filmmaker Michael Pack to the story of one of America’s most controversial and misunderstood figures on the American political landscape. Thomas is notoriously private about this personal life as well as his role as an Associate Justice of the Supreme Court of the United States.

Thomas is vilified by the left and extolled by the right. But no one seems to understand who he really is, or what he believes, outside his immediate family and close professional colleagues. Created Equal goes a long way toward helping general audiences understand the man, whether or not they agree with his politics or jurisprudence.

Pack and his team secured more than 30 hours of contemporary interview footage with Justice Thomas and his wife Virginia to create the film. The result is a unique and engaging documentary about one of the longest-serving and most complex justices. Perhaps surprisingly, we see a portrait of a remarkably consistent and principled justice, not a dogmatic conservative. 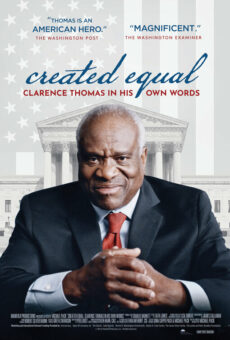 Thomas has a compelling personal story. In fact, his backstory and rise to prominence are nothing short of heroic. Born and raised in South Carolina, he spoke Gullah, an indigenous black dialect native to the low-lying coastal areas. Taken in by his grandparents, he attended private parochial schools. He excelled through grit and determination. In fact, an inscription in his high school yearbook by fellow classmates said “...blew that test, only a 98.” (Quote from My Grandfather’s Son, p. 37). He also experienced cutting racism from other students. But the nuns encouraged and supported him, and he pushed onward. He even enrolled briefly in seminary.

The nuns, however, pushed him toward college. As a first-generation college student, he entered the College of the Holy Cross in Worcester, Massachusetts, culturally about as far as you could get from the Deep South in 1968. While in college Thomas helped establish the Black Student Union, engaged in numerous protests, and clearly identified with the left. He excelled again. He was, by his own admission, an “angry young man.” He applied to and was accepted to Yale Law School.

Thomas did not excel at Yale, but he did well. He graduated in the middle of his class even as he still struggled with the remnants of Gullah dialect. Thomas acknowledges affirmative action likely played a role in admitting him to Yale. But he provides a compelling case for how the program ultimately hurt him when he entered the job market. He ended up taking the only job he was offered: working for Missouri State Attorney General John C. Danforth. Their personal and professional bond would serve Thomas well when Danforth entered the Senate.

However, to dismiss Thomas as someone clinging to the coattails to ride a political career would be a mistake. Created Equal concretely establishes the arc of Thomas’s character throughout his career, and his sense of ethics and self-worth are evident. The decisions he made, and opportunities he accepted, were grounded in his professional and personal transitions. Audiences should leave the movie with no doubt about Thomas’s authenticity, the principled root of his jurisprudence, or the way he approaches public service.

Pack cleverly emphasizes this point by using archival congressional video testimony to narrate Thomas’s painful journey through the nomination process. Thomas’s consistency is remarkable, given the pressure he was under to resign. Thomas did not ask for, nor want, the job of Supreme Court Justice. On the contrary, he was recruited for it. He accepted the nomination as a commitment to public service.

Understanding Thomas’s reaction to, and performance during, his controversial nomination process in 1991 can only be understood within the context of an arc of personal growth. The evolution of the man and his character organically spans deep-seated experiences growing up in the Deep South, a turn to the angry radical left during college, an evolution toward pragmatic Republican politics during his professional experience, and a transition to judicial originalism as a member of the Supreme Court of the United States.

Created Equal is a long overdue counterbalance to the mainstream narrative on Clarence Thomas. Thomas seems to care little about public perceptions of his life or jurisprudence, but the general public deserves a balanced treatment of his career and motives. Michael Pack’s movie goes a long way toward providing this more objective understanding of the man and his worldview.