How Uncle Sam Will Spend $2.3 Trillion on Coronavirus Relief

Before the coronavirus pandemic and the response to it triggered an economic meltdown, the U.S. federal government was planning to spend nearly $4.8 trillion in its 2020 fiscal year. Last week, President Trump signed a $2.3 trillion relief package aimed at mitigating an economic disaster.

How the government will be spending such a gargantuan sum of money via the CARES Act of 2020, and identifying who will benefit from it, are tough to visualize in a meaningful way. Hopefully, the chart below, which builds on analysis provided by the Committee for a Responsible Federal Budget, makes it easier to follow how panicky politicians have chosen to divvy up trillions of borrowed dollars in the largest aid package ever approved by the U.S. Congress. 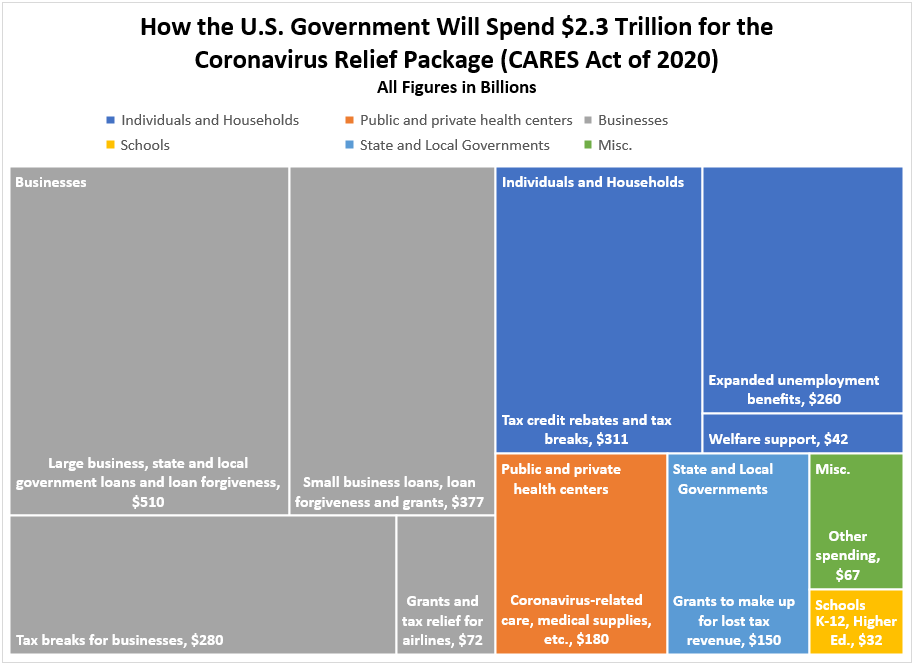 How the U.S. Government Will Spend $2.3 Trillion for the Coronavirus Relief Package (CARES Act of 2020)

Each of the boxes in the chart above contains a lot of details that will take time to unpack, but there is one main takeaway that all Americans should understand about what this spending means. Because all the $2.3 trillion being spent in this bill will be borrowed, which is coming on top of the $1+ trillion deficit the government was already going to run in FY 2020, the tax burden on Americans will be going up and government-provided benefits are going to be reduced.

Moreover, all that will happen much sooner than any politician or bureaucrat in Washington, D.C. will ever acknowledge.

As a case in point, consider that the CARES Act of 2020 was intended to prevent Americans from being laid off from their jobs because of government-mandated business closures aimed at slowing the spread of coronavirus infections. By providing loans and grants for both large and small businesses, as well as federal government-supported entities, the idea was to keep them paying Americans who have been blocked from earning incomes because of the government’s actions.

The bill provided $25 million to the Kennedy Center for the Performing Arts, which hours after President Trump signed the bill containing the provision bailing out the Kennedy Center into law, chose to lay off all the members of the National Symphony Orchestra anyway.

Kennedy Center President Deborah Rutter told the 96 musicians who make up the orchestra on Friday that their last paychecks were coming on April 3 and that they will not be paid again until the center reopens. The Kennedy Center has so far canceled performances through early May.

“This decision, from an organization with an endowment of nearly $100 million, is not only outrageous—coming after the musicians had expressed their willingness to discuss ways to accommodate the Kennedy Center during this challenging time—it is also blatantly illegal under the parties’ collective bargaining agreement,” Ed Malaga, president of the Local 161-710 of the American Federation of Musicians, slammed the move....

The payroll for the National Symphony each week is $400,000. Rutter said the $25 million would go toward “essential personnel to ensure we can reopen the Center.”

The CARES Act of 2020 also provided $260 billion in expanded unemployment insurance benefits for Americans who have been furloughed from their jobs. How likely is it that the bureaucrats of the federal government-supported Kennedy Center’s compared that line item in the spending bill to theirs and thought “we should have been given more” before deciding that since the money is all coming from the same place, they might as well provide their orchestra members the opportunity to collect unemployment benefits? They might also reason, “it’s not like they will be able to get such high paying jobs anywhere else anytime soon.”

With the federal spending spigot now fully open, will the Kennedy Center’s directors have the chutzpah to go back to Congress to demand more money to keep such high cost musicians on its payroll? If they do, will the musicians and their union change their tune and join them in supporting the effort? In the past, it has been hard for politicians to resist such joint efforts, which explains why we came into 2020 expecting to have a trillion dollar deficit.

Emergencies have a way of prioritizing what’s really important in a way that bureaucrats looking after their fiefdoms cannot. The question that must now be asked is whether Americans will be willing to pay higher taxes to pay off the money that’s been borrowed and will continue to be borrowed to support the Kennedy Center? Or might ordinary Americans look at the whole situation and ask, “What do we need a Kennedy Center for Performing Arts for in the first place?”, making it an excellent candidate for the chopping block.

Either way, it comes down to a choice between having to pay higher taxes or having fewer benefits provided by the government. The massive borrowing just unleashed by the coronavirus epidemic ensures those choices will be made.