Do You Live in a Sunshine City or a Sinkhole City?

Truth in Accounting has released its 2020 report on the Financial State of the Cities, which ranks the fiscal friendliness of the 75 most populous cities in the country according to their Taxpayer Burden or their Taxpayer Surplus.

Here’s how the nonprofit fiscal watchdog group describes how it determines whether a city imposes a burden on its taxpayers or provides a surplus through sound fiscal policies:

A Taxpayer Burden is the amount of money each taxpayer would have to contribute if the city were to pay all of its debt accumulated to date. Conversely, a Taxpayer Surplus is the amount of money left over after all of a city’s bills are paid, divided by the estimated number of taxpayers in the city. We split the cities into two groups. Cities that lack the necessary funds to pay their bills are called Sinkhole Cities, while those that do have enough money are referred to as Sunshine Cities. 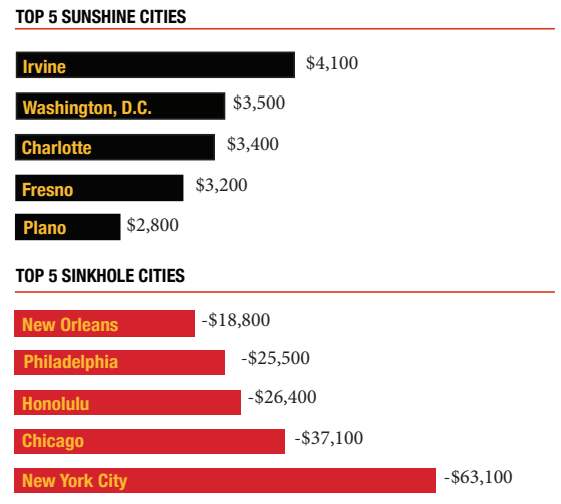 On which side of the ledger does your city fall? If you live in one of the 75 cities covered in the report, you can find out with the map below, where cities indicated by black dots are the Sunshine Cities, while Sinkhole Cities whose liabilities put them “in the red” are marked with red dots. 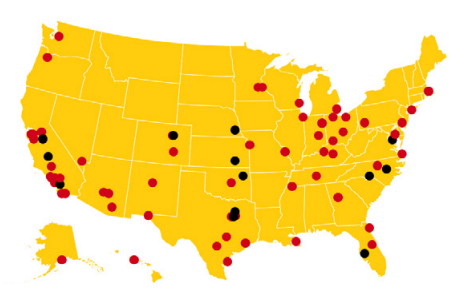 The report is easy to follow and explains why each city earned its ranking. A common theme among the sinkhole cities is the role of “Other Public Employee Benefits” as major liabilities putting them into the red.

There are only two ways to address that problem. One way involves increasing taxes, which is why the liability is described as a taxpayer burden. The other involves imposing greater fiscal discipline on the pay and benefits of local government employees.

The way your city chooses to address the problem will tell you who your local politicians think they really work for: local government employees or the taxpayers.