President Trump has released his budget proposal for the 2021 fiscal year. The first thing to say about it is this: Having just been acquitted in the U.S. Senate impeachment trial on a strict party-line vote in an election year, the president has zero chance of his budget proposal becoming law. In the current political environment, the proposal must, therefore, be treated more like a political position statement for the upcoming presidential election.

So what political position did President Trump stakeout for the 2020 presidential election campaign? Believe it or not, he’s claiming the title of being the most fiscally responsible major candidate running for President in 2020. This becomes more evident in the chart below, comparing the total amount of federal government spending proposed by each of the eight major candidates now running for President. 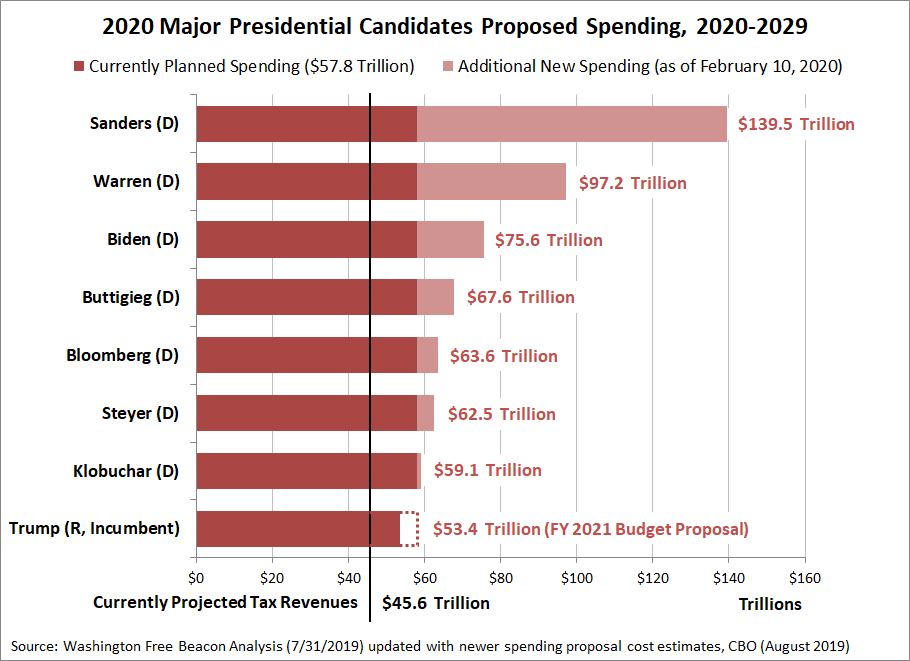 It includes spending on Trump’s priorities as he seeks re-election later this year, including $2 billion to fund further construction on a border wall with Mexico, a project that is especially popular with his political base, and funding for an infrastructure bill that is unlikely to be passed by Democrats and Republicans in Congress.

The budget forecasts $4.6 trillion in deficit reduction over 10 years and assumes economic growth at an annual rate of roughly 3 percent for years to come, officials said. Trump has taken credit for the strength of the U.S. economy thanks in part to tax cuts he championed and Congress passed earlier in his term. The budget funds an extension of those cuts over a 10-year period with $1.4 trillion.

The White House proposes to slash spending by $4.4 trillion over 10 years and reduce the deficit by $4.6 trillion in that time period.

Two months ago, I described the spending proposals of the major 2020 presidential candidates as “crazy, stupid.” Since then, many of the spending proposals have become even crazier and more stupid. The exception is President Trump’s latest budget proposal, which establishes him as the only candidate on record seeking to restrain the growth of future federal spending.

2020 is going to be totally bonkers for U.S. politics.