On October 11, 2019, the U.S. Federal Reserve announced it would begin buying billions of Treasury bills every month to ensure the nation’s banking system would have “ample reserves” through the end of 2019 as part of its efforts to help prevent a liquidity crisis from wreaking havoc in U.S. money markets.

That crisis was sparked by a surge in borrowing by the federal government, which was authorized by a bipartisan majority in the U.S. Congress in “the worst budget deal in history” in late July 2019. Two and half months later, the amount of borrowing the U.S. government needed to fund its newly approved spending reached a crisis point as U.S. banks and financial institutions could no longer keep up in providing the funds needed to feed the U.S. national debt’s growth spurt.

So the Fed announced it would step in, and in the three months since, has loaned 80 percent of the net increase in the amount of money the government has borrowed since the Fed’s announcement. The chart below shows how much the publicly held portion of the U.S. national debt has grown and also how much has been effectively financed by the Fed since October 16, 2019, just before the Fed’s balance sheet started showing its new accumulation of U.S. Treasury bills. 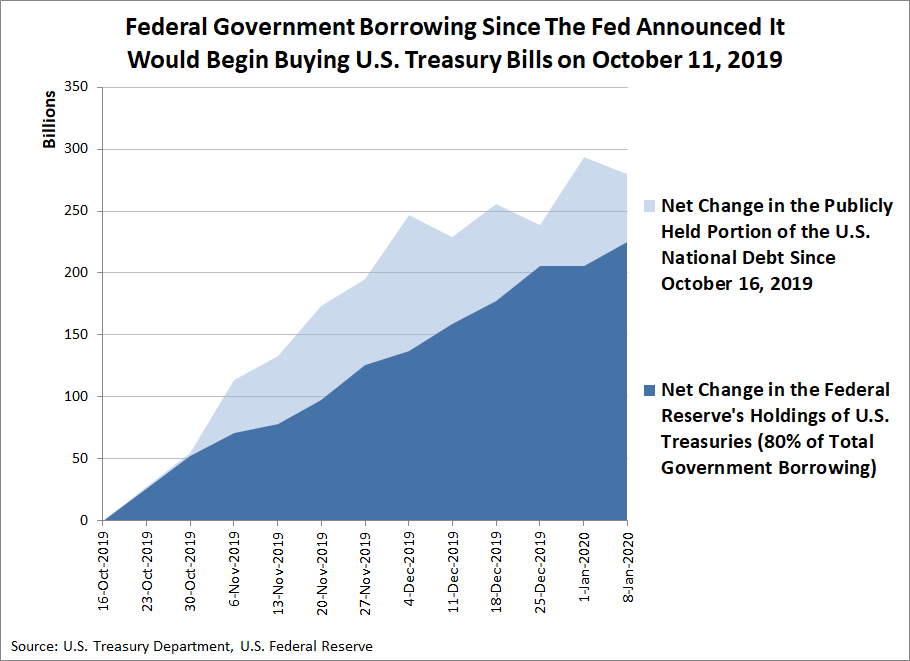 Federal Government Borrowing Since The Fed Announced It Would Begin Buying U.S. Treasury Bills on October 11, 2019

The good news is that the Fed appears to have succeeded in averting a major economic catastrophe resulting from the Uncle Sam’s insatiable desire to borrow massive amounts of money to sustain his excessive spending habits. The bad news is that there’s no sign yet that the “repo” market liquidity crisis the Fed was seeking to forestall is about to end anytime soon, with the Fed now signaling they will continue underwriting the growth spurt of the U.S. national debt through April 2020.

But since the U.S. government isn’t about to stop its excessive spending on that date, it’s pretty unlikely the Fed’s emergency lending program will be stopping at that time. Unless and until Washington, D.C.’s politicians act to restrain their spending, it’s unlikely the Fed will ever escape its new role as Uncle Sam’s favorite creditor.