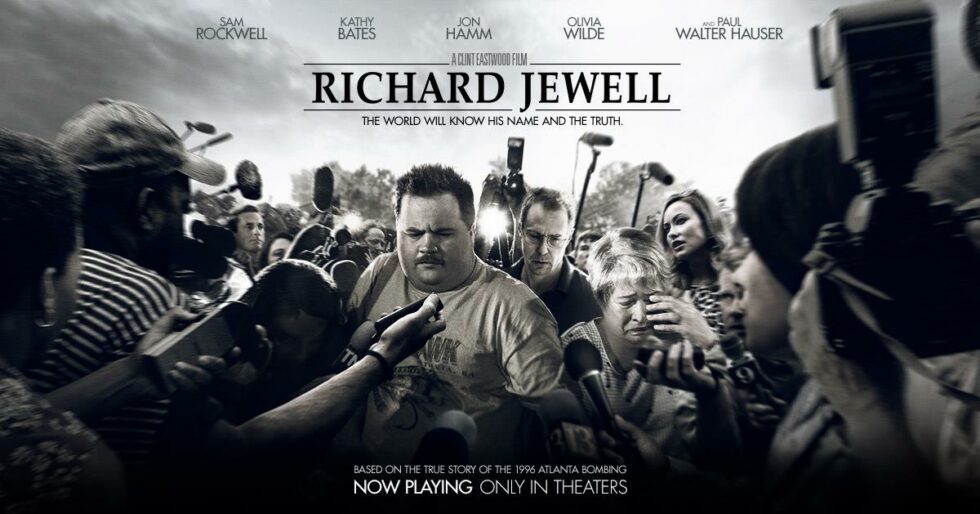 Warning! This article contains plot spoilers for the movie Richard Jewell in its analysis of the public controversy surrounding the film. For a review without spoilers, click here.

The mainstream media has staged a public relations coup against the movie Richard Jewell.

The movie, directed by Clint Eastwood and based on a screenplay by veteran screenwriter Billy Ray, is well crafted with strong performances by some of Hollywood’s best actors and actresses. As its title suggests, the movie is about Richard Jewell, the man who potentially saved scores of lives when he discovered a pipe bomb during the 1996 Olympic Games in Atlanta. Many in the media, however, have managed to make the film more about crime reporter Kathy Scruggs and how the movie appears to distort her journalistic ethics. These critics are wrong about Richard Jewell.

Rather than focus on the movie’s central themes of law enforcement misconduct and its role encouraging a public rush to judgement against an innocent man, the mainstream media has chosen to rally around protecting the reputation of one of its own (see for examples here, here, and here). They have focused almost exclusively on a single scene of a few minutes in a movie that runs more than two hours (129 minutes).

A closer look at the scene reveals a much more nuanced interaction between the key characters — the FBI agent leading the investigation of Jewell and the hard-nosed crime reporter (Scruggs) — than the movie’s critics acknowledge. Artistically and creatively, the scene fits both character arcs, serves as an important plot point for the entire movie, and helps set up the divergent paths of these two characters as the full scope of the FBI’s harm to Jewell is revealed.

From much of the media coverage to date, the general public wouldn’t get this crucial point.

Most movie critics seemed to be following the media narrative and perhaps even pushing back against the perception that the film plays to Eastwood’s conservative politics. They have focused on what former colleagues and some in the press believe is a character smear of Scruggs.

Scruggs, who died in 2001 at 43 years old of a morphine overdose, was by all accounts a tenacious, hard driving, hard partying, local crime reporter. “Dedicated,” “tough,” “hard nosed,” “hard charging,” “irreverent,” “relentless,” “fearless,” are just some of the adjectives used to describe her by friends and colleagues (see here and here). In fact, her work is so well respected that a writing center at the Athens Academy is named in her memory. She lit up the newsroom with her personality, an effect displayed well by Olivia Wilde’s excellent performance as Kathy Scruggs and directing by Eastwood. Indeed, it’s to Eastwood and Ray’s credit that they retain this strong focus throughout the film.

Scruggs is portrayed as the fearless reporter her former colleagues remember. Nevertheless, the movie, her friends and colleagues say, claims that Scruggs got her scoop from the FBI by “trading sex for a tip.” This, they say, is unethical, and something she never would have done. Moreover, they rightly point out that no evidence exists of Scruggs having traded sex for tips in this or any other case. But is this really what the movie depicts?

A superficial look at the scene with Scruggs and the agent — a fictitious character named Tom Shaw played by Jon Hamm — might suggest they have a point. A closer look, however, reveals that Scruggs’ interaction with Shaw is more complex. Based on the dialogue alone, no transaction like the one described by the movie’s critics occurred. Moreover, the “sex for tip” scenario is unlikely based on the way the scene is scripted. (Here, I may depart from my blog colleague K. Lloyd Billingsley.)

In the scene, Shaw, the lead FBI agent, willfully gives Scruggs the tip about Jewell, but the exchange is built on the familiarity of their prior relationship. (The familiar nature of this relationship actually becomes important later in the movie.) Scruggs calls Shaw by his first name as she takes a seat next to him at a bar. He acknowledges her in a familiar tone, even turning away as if to avoid talking to her. Scruggs presses him for a tip on the case. He refuses, at first. She does imply that she wants to sleep with him, but this is also rooted in a reference to a previous time with the agent. Shaw refuses, but relents, finally giving her the tip about Jewell.

When Scruggs continues to press Shaw for a one-night stand — probably the most significant break for a reporter on one of the highest profile crimes in the nation at the time — he looks at her, surprised, and says, “Are we really going to do this?” At this point, based on the dialogue, Shaw clearly doesn’t think he was engaged in a quid pro quo, or a trade. They leave the bar, implying they had sex. (Of course, this gives Scruggs’ supporters all they need to make the case Eastwood is smearing Scruggs.)

Importantly, Olivia Wilde, the experienced actress who plays Scruggs, also doesn’t think Scruggs was trading sex for a tip in the movie. “Contrary to a swath of recent headlines,” Wilde tweeted, as reported by NBC News, “I do not believe that Kathy ‘traded sex for tips’. Nothing in my research suggested she did so, and it was never my intention to suggest she had.” Wilde should know. She was reciting the dialogue from the script. She researched the character. The actual structure of the scene shows that Wilde (and Eastwood) are right, at least about the intent and character, even if some in the media want to interpret it differently.

The scene, however, should insight outrage — at the FBI. The tip was given to Scruggs by the lead investigator and the act was highly unethical. In fact, when the source of the tip was finally revealed in the book The Suspect, colleagues and reporters were shocked, even dumbfounded by the source. The leak was an egregious abuse of privilege and authority. But this wasn’t the only time the FBI crossed the line. The investigators’ abuse of their discretion is a main point of the film and lesson from case of Richard Jewell.

The real-world Scruggs never revealed her source or the circumstances under which she got the information while she was alive. She “worked hard” and “played hard,” fraternizing with cops by drinking with them and hanging out at watering holes well known for law enforcement. She dated cops. “Law enforcement loved her, just loved her,” former prosecutor Kent Alexander and co-author of The Suspect told the Atlanta Journal-Constitution. She would come up with tips on crimes that would leave her colleagues frustrated and envious (and reflected in the movie). She also had a drinking and prescription drug problem. At one point, police were called to an early morning scene where Scruggs was sitting in the driver’s seat of a taxi at a hotel, drunk and naked.

In short, a plausible scenario could be made where Scruggs would use her well-known reputation as an irreverent partier and tenacious reporter to leverage an existing relationship with a law enforcement officer who was not as committed to his professional ethics as she was to hers. She very well could have gone up to the line, even if she did not cross it (or did not think she crossed it). She would have leveraged these relationships to get the scoop.

Indeed, the more plausible interpretation of the scene in Richard Jewell is that this is exactly what Scruggs did and was not used by Eastwood to intentionally smear her. Billy Ray wrote the character, and Wilde played the part, of a strong, ambitious professional reporter (who happens to be a woman). At no point in the movie does Scruggs appear weak. Quite the contrary. She takes charge of the situation, sets out goals, and accomplishes them using her journalistic savvy and knowledge of the industry.

Creatively, Eastwood and Ray were faced with a dilemma in scripting the movie. They could ignore the source of the tip and just have Scruggs magically appear with it, or they could build it into the story. They choose to build it into the story even though they had precious few details about the circumstances. They built a scene that they believed was consistent with the behavior of the character. Their use of artistic license was well within the bounds of the narrative filmmaking convention.

Moreover, as the movie’s critics have relentlessly focused their efforts on protecting the reputation of one of their own, they have completely missed or ignored the redemptive behavior of Scruggs in the movie. In Richard Jewell, Kathy Scruggs intervenes and tries to set the record straight on Jewell, but is rebuffed by the FBI. At the end of the narrative, it’s the FBI’s unwillingness to see the plain truth that is the real source of the harm. The media was an important player in the very real abuse of power by federal investigators.

Scruggs appeared to have never come to terms with her role in the Richard Jewell case. Some have speculated that this case and its effect on Jewell contributed to her struggles against depression and continued drug abuse. This tortured emotional legacy is clear in Wilde’s heartfelt interpretation of Scruggs.

Unfortunately, audiences seem to have been swayed more by the media controversy than the substance or quality of the film. Those that do see the movie have enjoyed it. On movie review aggregator Rotten Tomatoes, audiences give the film 96 percent “fresh” (as of December 17, 2019). Richard Jewell is worth going beyond the headlines to see.