Motherless Brooklyn is a stylish homage to classic film noir. It also provides a powerful narrative for the uncompromising way in which power can be wielded by those with access to it. Add in the story’s unusual context—urban renewal in post-war New York City—and Motherless Brooklyn might well contend for the most pro-liberty film to come out of Hollywood in 2019.

Set in 1957, Motherless Brooklyn follows Lionel Essrog (Edward Norton) as he attempts to unravel the mysteries surrounding the death of his mentor, father figure, and employer, Frank Minna (Bruce Willis). Essrog is a young investigator working for Minna’s detective agency. He also suffers from Tourette’s syndrome, resulting in nearly uncontrollable outbursts of thoughts and feelings. Essrog’s photographic memory, however, provides important benefits that more than make up for the annoyances of his affliction, as Minna knows. Essrog’s memory also ensures he ends up in more than one precarious position for knowing too much. 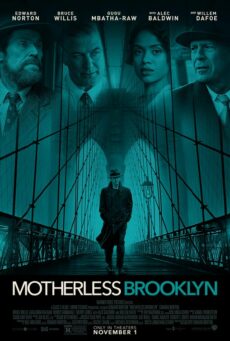 Essrog’s loyalty, we find, is more than superficial. Minna rescued him and two of his colleagues from an orphanage. He gave them mentorship and jobs. He also shielded them from the worst of their chosen profession. As Lionel peels back the layers of the most recent investigation, the one that got Minna killed, he begins to piece together a jigsaw puzzle of power, corruption, and racism. His investigation takes him from the seat of power in the mayor’s office to trendy Harlem jazz clubs to poor black neighborhoods buckling under the pressure of urban renewal. He also comes face-to-face with the real kingpin of Gotham’s power structure: Moses Randalph (Alec Baldwin).

Ed Norton, who is also the director and screenwriter, has done his homework. Central to the movie’s plot is the machinations of Randolph, a larger-than-life character on screen who is modeled after the larger than real-life “master builder” and power broker Robert Moses. (The parallels are so clear and dramatic that one wonders why Norton simply didn’t name the character Robert Moses.) Randolph, like Robert Moses, uses his influence to secure appointments to multiple city commissions, twist the mayor’s arm for personal power, and exerts undue influence over mega projects like toll roads, parkways, and parks.

But the heart of Motherless Brooklyn’s story is the conflict and personal tragedies caught in urban housing redevelopment policy of the 1940s and 1950s, what African-American novelist James Baldwin derisively (if accurately) called “negro removal”. The vast clearance of older, low-income and often minority neighborhoods was green lighted by the U.S. Supreme Court in Berman vs. Parker (1954). The case allowed cities to raze these neighborhoods, often by seizing private property through eminent domain, for redevelopment. All the city planning commission had to do was declare the blocks or neighborhoods “blighted.”

Across the nation, cities adopted ordinances that specified blight “conditions” that effectively allowed private companies and governments to literally bulldoze neighborhoods to clear the way for new commercial development. Hundreds of thousands of low-income residents in the 1940s, 1950s, and 1960s were displaced by these policies. Substantial portions of these residents were not relocated to similar housing. (In principle, the forced relocation meant that almost none of the residents relocated to “equivalent” housing because their preference was for their existing home and neighborhood.) Norton’s storyline provides an unusually sophisticated look at how power is used (and abused) in these types of programs.

Some critics have suggested that the Norton’s screenplay caricatures his antagonists. Unfortunately, reality does not stray too far from the truth in the case of Robert Moses, who was, in fact, called New York’s Master Builder, and recognized as the region’s architect of its toll bridge, highway, and parkway system. (See Robert Caro’s Pulitzer Prize–winning biography The Power Broker.) More stylistically, the characters fit well into the neo-noir film genre.

As the screenwriter and director, Norton deserves credit for balancing a neurological disorder of Tourette’s syndrome with the unusual cognitive ability of photographic memory. The balance gives Essrog humanity and vulnerability while evoking compassion even from those annoyed by the disorder. The disorder plays a minor role as comic relief, but it also gives his character emotional distance which he struggles to overcome.

Motherless Brooklyn also benefits from a very strong supporting cast. Gugu Mbatha-Raw plays Laura Rose, a young African-American lawyer and tenant-rights activist. She has a mysterious link to powerful city interests and Frank Minna through her uncle Billy Rose (Robert Wisdom) and his Harlem jazz club. Willem Defoe provides a characteristically riveting performance as Paul Randolph, a brilliant, idealistic engineer and estranged brother to Moses. Cherry Jones plays grassroots housing activist Gabby Horowitz in a performance that mirrors the real-life grit and tenacity of the legendary Jane Jacobs, one of the few people to go toe-to-toe with Robert Moses and win (by blocking an expressway that would have torn through Greenwich Village).

The pace of Motherless Brooklyn is slow and the plot somewhat predictable. But Norton’s creative decision to tell the story within the neo-noir genre makes the film work. The attention to setting is well-crafted, drawing audiences into the mood so they as if they have been pulled into the period with the characters.

Nevertheless, Motherless Brooklyn is a well-told story that sheds light on a dark part of U.S. urban policy.

For those interested in themes of government power and abuse in narrative film, check out Little Pink House. This 2018 film provides a more contemporary take on eminent domain using the actual case of Kelo vs. City of New London. (A movie review of Little Pink House can be found here.)

For those interested in more reading on housing policy, the following books and articles are also useful: