The Current War (Director’s Cut) had a circuitous and uncertain road to American theaters but finally arrived in 2019. The 2017 historical drama depicts the fight to build and control America’s electrical grid in the 1880s, but became ensnared during the Weinstein Company’s implosion following sexual abuse allegations against Harvey Weinstein.

The delay probably saved the film from obscurity thanks to its executive producer Martin Scorsese. A “final cut privilege” allowed the auteur filmmaker to restore some of director Alfonso Gomez-Rejon’s (The Town and the Dreaded Sundown, Me and Earl and the Dying Girl) vision for the movie (hence the reference to “Director’s Cut”). The Current War is likely better than the original cut. Alas, it still falls flat.

The dull outcome seems odd. Sparks fly, literally and figuratively, when American uber inventor Thomas Edison (Benedict Cumberbatch, Dr. Strange, the Hobbit, the Imitation Game) and Pittsburgh-based industrialist George Westinghouse (Michael Shannon, Nocturnal Animals, 99 Homes, the Shape of Water) race to bring electricity to every U.S. city, village, and hamlet. The brilliant but mercurial Edison had built the world’s first practical long-lasting light bulb and was all-in using Direct Current (DC). Westinghouse went all in on the more powerful Alternating Current (AC) because its greater reach would lower costs. The movie does a good job showing the competitive drive of each tycoon while also educating the audience on the technology of the time.

As a narrative film about a critical juncture at the dawn of the modern industrial age, The Current War is impressive. The movie is elegant and beautiful, reflecting the high production values of the producers and filmmakers. Audiences feel they are really in Edison’s laboratory with his research team, the first of its kind in the world. Exquisite attention to the detail of panoramic landscapes and cityscapes of late 19th century America effectively transport audiences into a period in which the nation was maturing at break-neck speed into the second half of its industrial revolution. 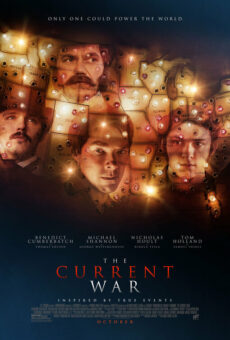 Somehow, however, the movie loses its luster in the competition between the principal characters. While the story has them (accurately) competing against each other, the tension in the movie is built more around the moral and ethical quandaries of their business practices and behavior than the conflict between the titans of business. The addition of Nikola Tesla (Nicholas Hoult, Mad Max: Fury Road, The Favourite, Tolkien) as the brilliant but entrepreneurially naive immigrant inventor bridges some of this gap. Nevertheless, the story on the screen unfolds as if the audience is watching three parallel story lines, not trajectories inextricably intertwined through the narrative plot.

Despite the lack of forward momentum, the movie will likely keep (adult) audiences engaged, particularly those interested in historical films, entrepreneurship, and economic history. An excellent supporting cast that includes Katherine Waterston (Fantastic Beasts and Where to Find Them, Steve Jobs, Alien: Covenant) as Westinghouse’s wife, Tom Holland (Spider-Man, the Avengers movies, In the Heart of the Sea), as Edison’s assistant Samuel Insull, and Tuppence Middleton (The Imitation Game, Jupiter Ascending) as Mary Stillwell Edison help keep the narrative on track, build empathy for the characters, and reinforce the general narrative.

Unfortunately, in the end, the movie fails to spark the flames we expect to see when these lives collide. Nevertheless, the movie remains a fine film as a period story that showcases excellent production values and strong acting.