Miss Virginia and the Political Realities of Public-School Reform 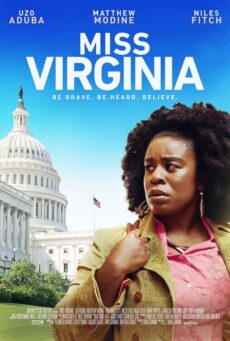 Directly inspired by real-life education reform activist Virginia Walden Ford, Miss Virginia tells the story of Virginia Walden (Uzo Aduba, Orange is the New Black), an African-American single parent turned education-reformer in Washington, D.C. As her teenage son, James (Niles Fitch), feels the lure of drug gangs and street life in their neighborhood, Walden tries to get him out of the failed public school and into a private-school alternative. At first, she tries to enroll him in a nearby religious school. The new school environment turns her son into an enthusiastic learner. But, even working two jobs, she can’t scrape up enough money to pay for the tuition.

When Walden is forced to re-enroll James in his old public school, her son continues to feel the pull of the streets. Naive to the public school system and its politics, Walden becomes increasingly desperate. She begins educating herself on the school system and lobby for a publicly funded school voucher to allow her and other parents to give their children the same opportunities as wealthier families.

She starts first at the school board, which refuses to listen to her, claiming she doesn’t have standing because she has not pre-registered to speak. (Yes, this happens in real life, too.) Undaunted and energized by the dismissive attitude of public school officials, Walden moves to their congressional representative, Lorraine Townsend (Aunjanue Ellis, The Help, When They See Us). Unfortunately, despite her rhetoric supporting quality education, Townsend stonewalls Walden’s efforts with the support of the public school establishment. When Walden attends a public forum on education reform, the public school administrators and Townsend tell her that the problem is a lack of funding for the schools, and that vouchers are a short-term solution that doesn’t fix the problem.

Unwilling to give up, Walden confronts conservative Congressman Clifford Williams (Matthew Modine, Full Metal Jacket, Stranger Things), who presumably helped get the Milwaukee program off the ground. At first, he refuses to invest in Walden’s movement, claiming that Washington, D.C., parents simply don’t support the program. Walden sets out to prove him wrong by collecting signatures despite opposition from public school advocates and drug gang leaders who want to maintain their power of kids in the neighborhood.

The film takes liberties with historical details, but the themes and main plot points are on target. Most of these choices serve the narrative of the story. As in the movie, Virginia Walden Ford, the person on which the film character Virginia Walden is based, is not a natural public speaker. We see her evolve into a powerful voice for reform as she becomes more educated and more experienced with the entrenched special interests supporting the public school status quo. Ford’s son in real life, unlike the movie, received a privately funded scholarship to attend a private school. The school voucher, however, did actually get him out of a dysfunctional public school (where he later excelled).

Similar real-world experiences motivated Ford to mobilize parents in Washington, D.C., working against very real opposition from the public school establishment, so that other parents could reap the same benefits she did through publicly funded vouchers. In this sense, in a rare cinematic turn, Virginia Walden Ford is more heroic than the figure in the film. The highly structured storytelling framework for narrative film, however, would not have allowed this complicated story difficult if not impossible. (Hence, Miss Virginia is a narrative film, not a documentary.) Nevertheless, the motivational effects of the benefits from private school vouchers on Ford were largely the same in real life as they are on Walden in the movie, maintaining the spirit and internal consistency of the story.

More importantly, Miss Virginia gets the most important elements of the struggle for private school vouchers right. Although the concept has been around for decades, modern support for private school vouchers started in America’s inner cities, not the suburbs or wealthy enclave neighborhoods. In an unlikely alliance which is under appreciated today, low-income, mostly minority parents and a few elected officials (e.g., Polly Williams in Wisconsin and Cleveland City Councilwoman Fannie Lewis), worked with conservative elected officials such as Governors Tommy Thompson (Wisconsin) and George Voinovich (Ohio) to pass state legislation enabling publicly funded private school vouchers. Miss Virginia is a remarkably accurate map of the politics surrounding these fights, often in the inner-city neighborhoods, including the unusual but critical alliances it forged. This difference in Washington, D.C., was that the parents did not have a publicly elected representative of their district who was also a champion of their needs.

Virginia Walden Ford’s efforts were critical to Congress passing the District of Columbia’s school voucher program in 2003, which started up in 2005. The initial program registered 2,692 applicants, of which 1,848 were considered eligible based on income and residency criteria. Students were awarded scholarships of up to $7,500 (about half the per pupil spending in the DC public schools at the time). About 1,000 students received scholarships in the first year out of 1,366 awardees. Since the program’s inception, the program has received 8,480 applications and 5,547 students met eligibility requirements. The program has awarded 3,738 scholarships which are typically funded for the entire period the children are in school until graduation. As of January 2019, 1,650 students are still in the program.

Does the program work? Generally speaking, yes, but the evidence is somewhat mixed. Students in the program are significantly more likely to graduate high school—one of the best predictors of future success—and report fewer instances of bullying and intimidation. The authors of an independent program evaluation, “Evaluation of the DC Opportunity Scholarship Program: Experimental Impacts After at Least Four Years” conducted by the National Center for Education Evaluation and Regional Assistance in the U.S. Department of Education, offer this conclusion:

Based on analysis of the final spring 2009 data we find that the Program significantly improved students’ chances of graduating from high school. The offer of an OSP scholarship raised students’ probability of completing high school by 12 percentage points overall. On average, after at least four years students who were offered (or used) scholarships had reading scores that were statistically higher than those who were not offered scholarships, while math scores were statistically similar to those who were not offered scholarships. Additionally, the OSP raised parents’, but not students’ ratings of school safety and satisfaction. Parents were more satisfied and felt school was safer if their child was offered or used an OSP scholarship. The Program had no effect on students’ reports on school conditions.

For more information on the effects of the D.C. Opportunity Scholarship Program, see the following links:

Disclosure: The author is co-founder, former Vice President for Research (1994-1998), and President (1989-1994, 2002-2004) of The Buckeye Institute, a free-market think tank in Ohio. While at the institute, he authored and supervised research on market-oriented approaches to education reform, including the effects of private school vouchers. He testified frequently before the Ohio State Legislature and U.S. Congress on education reform issues.