How Well-Funded Are Government Employee Pension Plans in Your State?

These are just three places in the United States that we’ve talked about in The Beacon because their recent history has been defined by the fiscal problems each faces. Fiscal problems that arise only because they don’t have the money to fund the generous retirement benefits their politicians have promised to their government employees.

It’s scary to think that there might be more than three, but there are. Is your state one of them? Or might your state avoid the risk of diverting your tax dollars to its retired bureaucrats?

The Tax Foundation has created a map to illustrate how well-funded each states’ public employee pensions plans are. The more ‘in-the-pink’ your state is, the more likely that your tax dollars won’t be diverted to cover the cost of funding the retirements of bureaucrats. The more orange your state, the less likely you’ll be getting anywhere close to the full value of what you pay in state income, sales, property and other taxes for public services in your community, like police and fire departments or schools. Click the map below for a bigger picture. 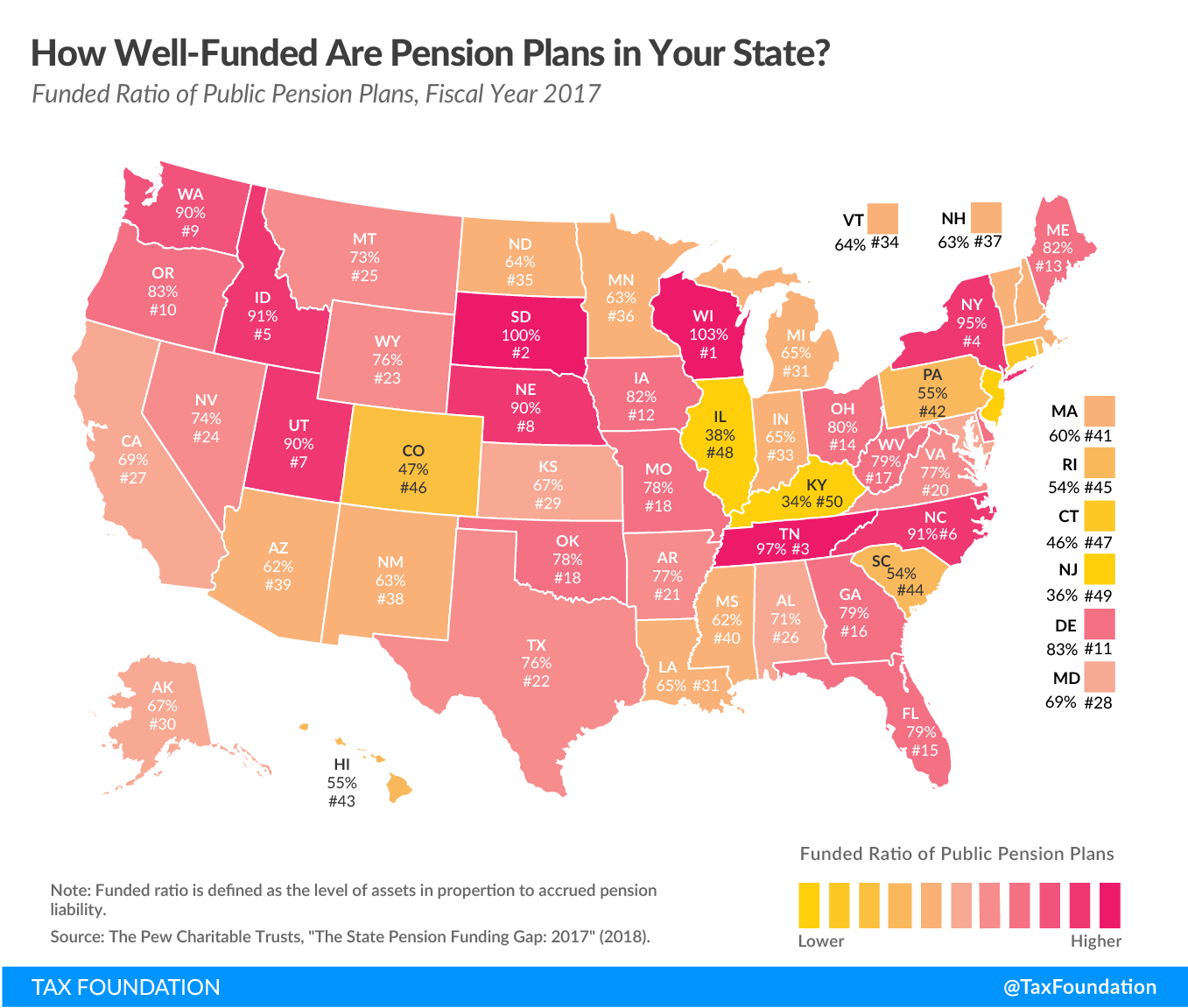 Janelle Cammenga discusses the data behind the map:

Fiscal year 2017 (the most recent data available) saw a combined $1.28 trillion in state pension plan funding deficits. While massive, this was actually a decrease from Fiscal Year 2016’s $1.35 trillion gap. Pew attributes this improvement to strong returns on investment from higher-risk plans that helped some states to narrow their funding gaps since last year. To be fair, the improvements have been modest. The message is still clear: many states face a pension crisis.

She also explains why state government pension underfunding is becoming a major problem:

Lower funded ratios indicate when a state’s pension plan is not adequately funded, while higher funded ratios are evident in states where pension assets are keeping relatively good pace with accrued liabilities. Low funding levels are challenging not only because of the large contributions required to make up the debt, but also because they generate less in investment earnings.

A number of the state and local governments with the lowest-funded pensions for their public employees have encouraged their public employee pension plan managers to try to make up the gap by pursuing riskier investments, with the knowing acquiescence of state government officials. But rather than providing a reliable path for generating the higher returns needed to make these pension plans solvent, these investments are really big bets that have a high risk of going belly up and failing.

Bets like those made by several public pension funds in companies like WeWork and Uber that are far from profitable, where WeWork by itself has gone from a valuation of $47 billion to a high likelihood of bankruptcy (corresponding a valuation of nearly $0) in the last six weeks.

These failures come with an increased risk to taxpayers of having to bail out the generous retirements of bureaucrats with higher taxes. City Journal‘s Steven Malanga describes the findings of recent studies into the problem of public employee pensions.

Since 2001, the portion of state pension-fund portfolios invested in stocks and alternate financial vehicles rose by 10 points, to 77 percent. Portfolio managers chased these investments even as the pension systems matured, with a growing percentage of members nearing retirement. This approach departed from that of just about every other type of pension fund. As a 2014 study by the Society of Actuaries noted, “Public sector plans in the U.S. are unique in that they have taken additional risk as the plans have become more mature, compared to private sector plans in the U.S. and private and public sector plans in Canada, UK and the Netherlands, which have taken less risk as plans have matured.”