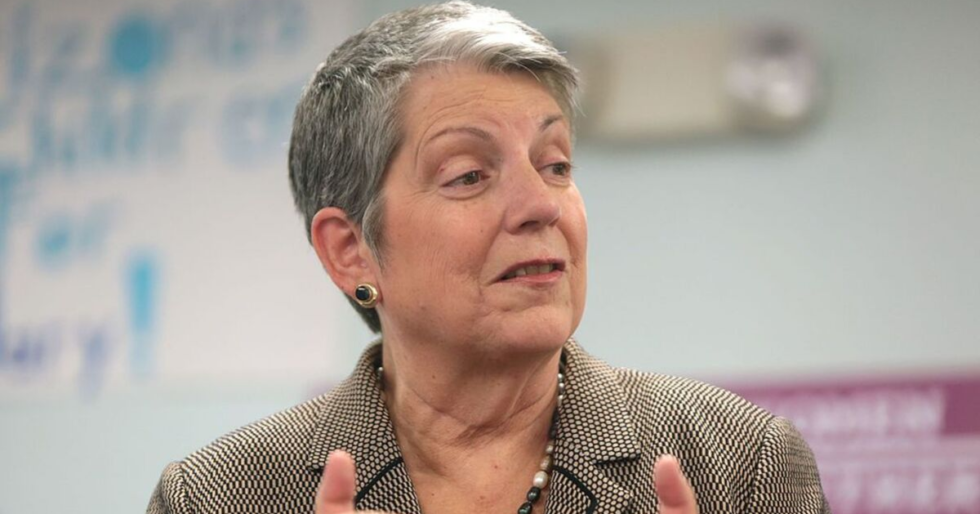 University of California President Janet Napolitano is stepping down from the post she has held since 2013. Californians, particularly students, have cause to wonder why she was given the job in the first place. Never known as an educator, Napolitano ruled the university like a typical politician.

As the Sacramento Bee noted, “in 2017, a state audit alleged Napolitano’s office hid $175 million from the public while tuition increased,” and it was just a bit more than an allegation. Napolitano used the money to shower perks on staff and renovate the houses of UC chancellors. State Auditor Elaine Howle reported that Napolitano’s office “intentionally interfered” with their investigators. Despite the corruption and obstructionism, Napolitano faced no criminal charges.

Reports of her resignation failed to note that Napolitano made her public debut in the 1991 campaign to keep Clarence Thomas off the Supreme Court. Anita Hill accused Thomas of sexually harassing her, and attorney Napolitano, then with a Phoenix law firm, represented Hill in the matter. During the confirmation proceedings, Hill’s witness Susan Hoerchner “suddenly developed amnesia” about parts of her story that contradicted Hill. Napolitano refused to answer questions about whether she had persuaded Hoerchner to change her testimony.

Napolitano became attorney general and governor of Arizona, then headed up the federal Department of Homeland Security. In that role, she put out the DHS report Rightwing Extremism: Current Economic and Political Climate Fueling Resurgence in Radicalization and Recruitment, a sweeping indictment of those who prefer limited government and defend constitutional measures such as the Second Amendment.

For their part, UC students asserted their First Amendment rights by protesting Napolitano’s steady tuition and fee hikes while hiding $175 million. When the slush fund emerged, students called for Napolitano’s resignation and issued a statement reading: “We believe that the administration is incapable of holding itself accountable.”

If students, parents, and taxpayers see Janet Napolitano’s departure as long overdue, it would be hard to blame them.