If you were to go back to 1776 and ask the typical American to describe, in one word, the fundamental principle behind the new American government, that one word would have been liberty. The new government was formed to protect the rights of its citizens–to defend their liberty.

If you were to ask the typical American today to describe, in one word, the fundamental principle behind the United States government, that word would be democracy. Our government is a democracy, designed to carry out the will of its citizens, as revealed through a democratic decision-making process. 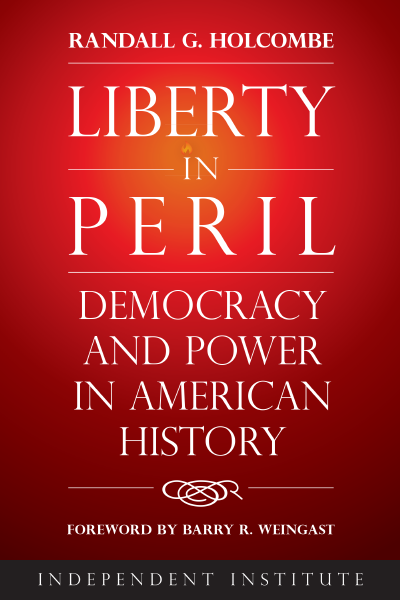 How was the fundamental principle of American government transformed from liberty to democracy? I explain that transformation in my new Independent Institute book, Liberty in Peril: Democracy and Power in American History. The book describes American political history using a public choice framework.

The American Founders thought that the greatest threat to their liberty was government. The Declaration of Independence is primarily a list of grievances against the King of England. After describing the ways in which he compromised the liberty of the colonists, the Declaration proclaims the right of the colonists to replace the British government with a new government designed to protect their rights to life, liberty, and the pursuit of happiness.

My book describes the events that, over two centuries, transformed that government of limited and enumerated powers into a government that, most Americans believe, should see its role as carrying out the will of its citizens. As the title indicates, this transformation truly does place liberty in peril.