The Congressional Budget Office has published its Long-Term Budget Outlook for 2019, projecting the U.S. government’s fiscal health will become much worse over the next 30 years in its baseline scenario.

Figure 1-3 from the CBO’s report visually tells the tale of what the agency predicts, where a rising tide of spending funded by new borrowing will cause the publicly held portion of the U.S. national debt to rise from 78 percent of the nation’s GDP in 2019 to 144 percent in 2049, despite rising revenues from taxes. 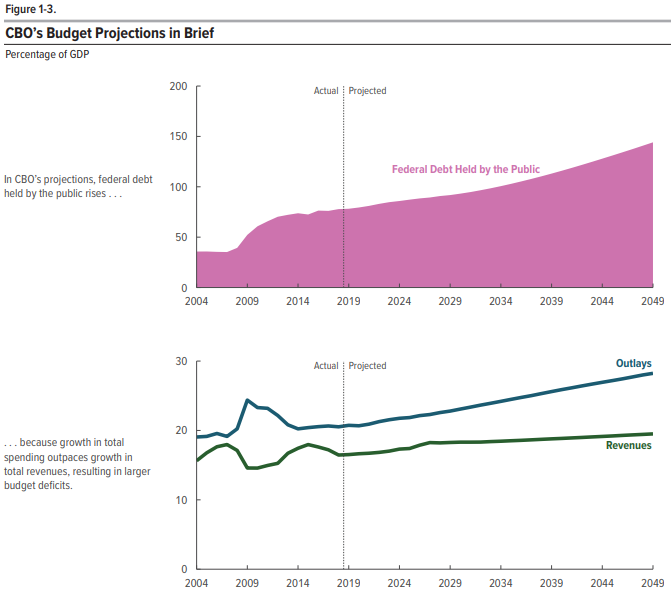 The continuation of Figure 1-3 from the report communicates what the major drivers are for that baseline result. On the spending side, the biggest offender is spending on major health care programs, which include Medicare, Medicaid, the Children’s Health Insurance Program, and subsidies for health insurance purchased through the Affordable Care Act’s government-run exchanges. 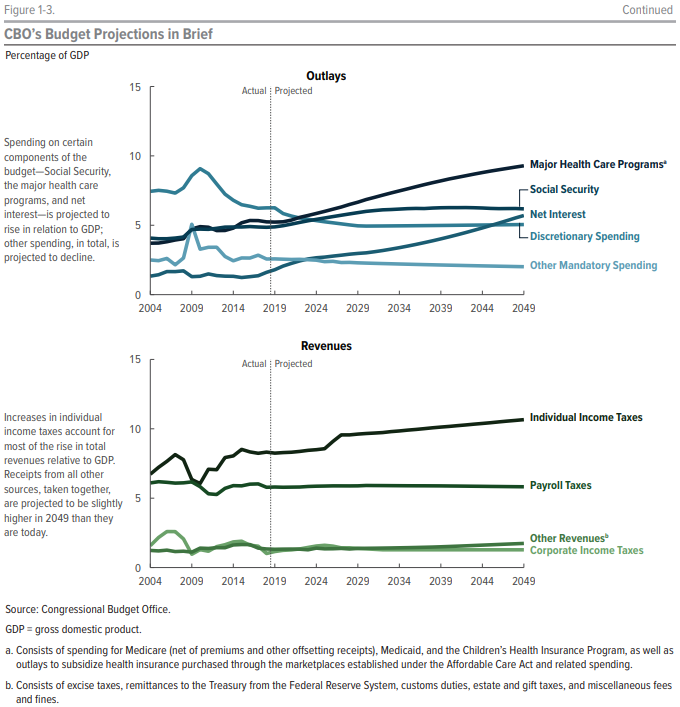 The second biggest offender is Net Interest Payments on the U.S. national debt, which is a consequence of the amount of borrowing the U.S. government will need to undertake to support its spending. In the CBO’s extended baseline scenario, net interest payments will grow from 1.8 percent of GDP in 2019 to 5.7 percent of GDP in 2049, becoming the fastest growing portion of federal government spending after 2034.

The CBO’s extended baseline scenario assumes that economic growth will be steady, that some of the 2017 tax cuts will be allowed to expire, and that Social Security benefits will be slashed when the program’s trust fund becomes depleted in 2032, just 13 years from now. As such, the CBO’s baseline scenario represents a highly optimistic scenario for the U.S. government’s projected fiscal situation.

Meanwhile, in its latest alternative fiscal scenario, the CBO pessimistically assumes that politicians will not allow any tax hikes to take effect whenever “temporary” cuts might otherwise expire and that they will also not allow Social Security benefits and other spending to be cut after 2032. Figure 2-1 from the report indicates the publicly held portion of the national debt will soar to 219 percent of GDP. 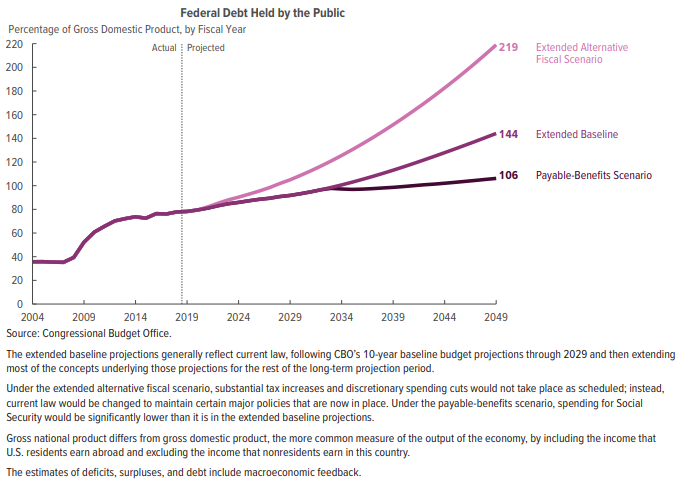 To balance out its fiscal pessimism, the CBO also projected how large the publicly held portion of the national debt would grow if all tax hikes were allowed to take place as scheduled and as Social Security benefits are slashed after 2032, when the amount of benefits that Social Security can pay out under current law would be limited to how much the program collects in taxes on employers and employees.

Under this “payable-benefits” scenario, the growth of the publicly held portion of the national debt would be limited to just 106 percent of GDP in 2049. Nobody should take this scenario seriously however, because it is based on the budget laws that politicians have specifically written to game the CBO’s budget-scoring exercises for new spending legislation, which are designed to make future spending look smaller than it will really be.